This is a text widget, which allows you to add text or HTML to your sidebar. You can use them to display text, links, images, HTML, or a combination of these. Edit them in the Widget section of the Customizer.
Posted on August 25, 2018August 23, 2018 by Page 130

Once we’d got past The Liver Building, things were getting dark – literally and metaphorically. The police presence became more and more intrusive. At one point, a parked car gave a police van the opportunity to cut across and block us in. Without skipping a beat, Gimpo rallied some troops to push the van out of the way, screaming “come on we’re nearly there”. Use Of The Handbrake was clearly a lecture missed by the police driver.

I’d stayed pretty much alongside the Ice Kream Van for the whole precession. Those chimes are still with me over a year later. As we reached an industrial area of The Strand, distant cries of “wristbands, show me your wristbands” faded in. The last couple of hours had been very much open to the public, but the next part was just for The 400. Through the checkpoint and then onto some wasteland – apparently Everton’s future home -th precessional route gloriously laid out with more traffic cones. And there it was a tall wooden pyramid, 23 feet tall, with masses of kindling at its base. What are they going to put on there?

Over the next 15 minutes, the rest of the stragglers arrived and joined the circle, nearly everyone resplendent it their robes or yellow ponchos. Oliver kicked off official proceedings with quotes from ‘Justified and Ancient’ and updates about our fishy friend – “The Perch is in the Mersey”. Bill and Jimmy emerged wearing The Horns Of Mu, carrying 10 foot long flaming torches and circling the as yet unlit pyre. Oliver stripped off his shirt, daubed the word MU onto his chest and looked almost ready to sacrifice himself to the cause. But no, the two (empty?) coffins were in place in the pyre and the time was right. The JAMs stepped forward and lit the base from opposite sides and within a few seconds the pyre was ablaze and looking pretty fuuking spectacular.

There then followed chants of ‘MuMufication’ – not easy after a long day – and ‘The People’s Pyramid Will Be Built’, along with Discodian heckles of ‘Hail Eris’, super fan chants of ‘Badger Badger Badger KullKullKull’ and one glorious declaration of ‘Historical a Weirdness’. Annebella Pollen, who was stood nearby, nodded approvingly . Over the next ten minutes I was lucky to hear a story from Toxteth Tommy about Bill’s inspiration for the funeral pyre – an entire village had supported a bereaved father in his desire to have a pyre for his son who died at a young age, after the authorities had refused. Then a Daisy announced that the bar and pizza van were open for business as was he Ice Kream Van were for £99 you could sign up for MuMufication.

There were some truly wonderful images captured by the pyre. Below are loads of them. 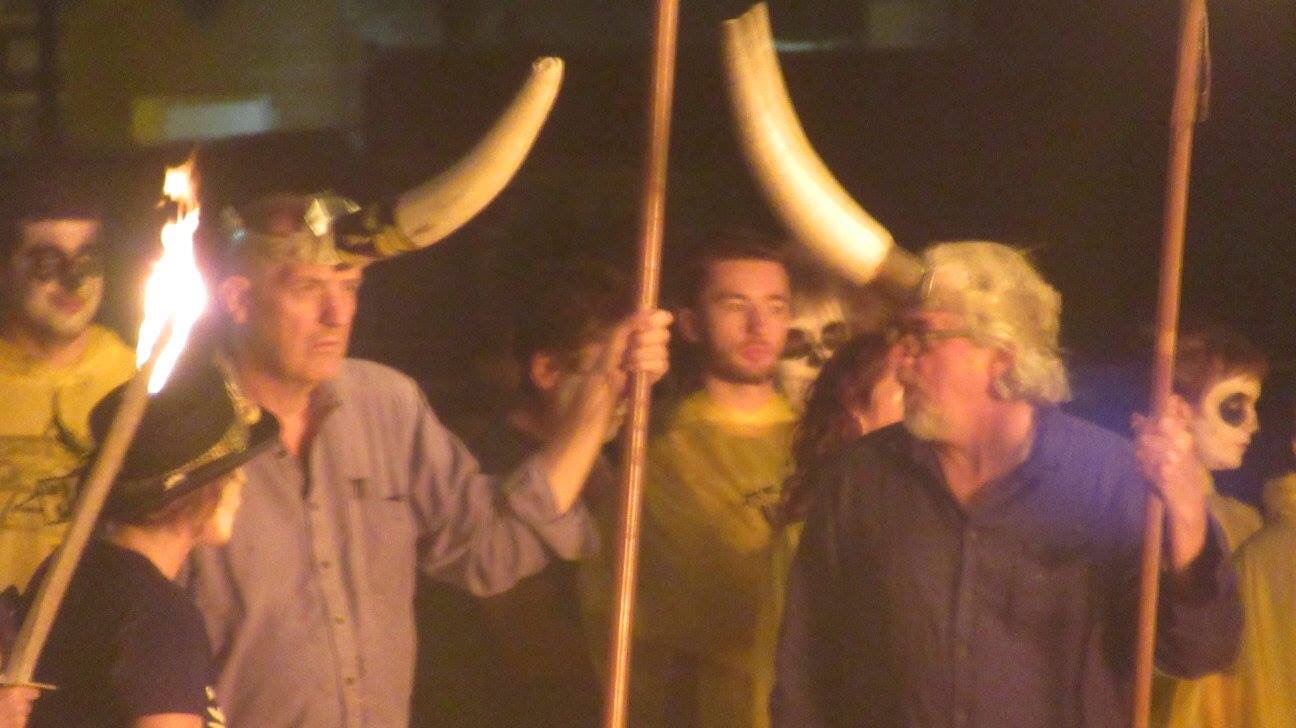 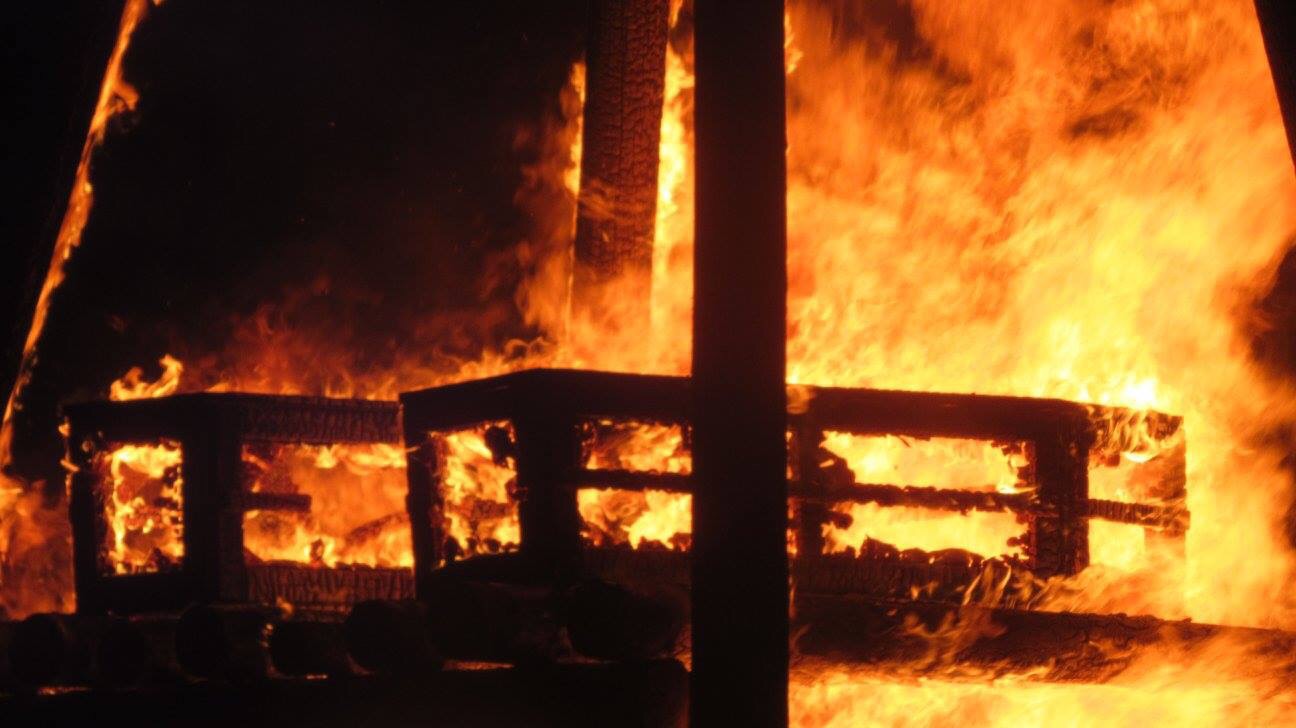 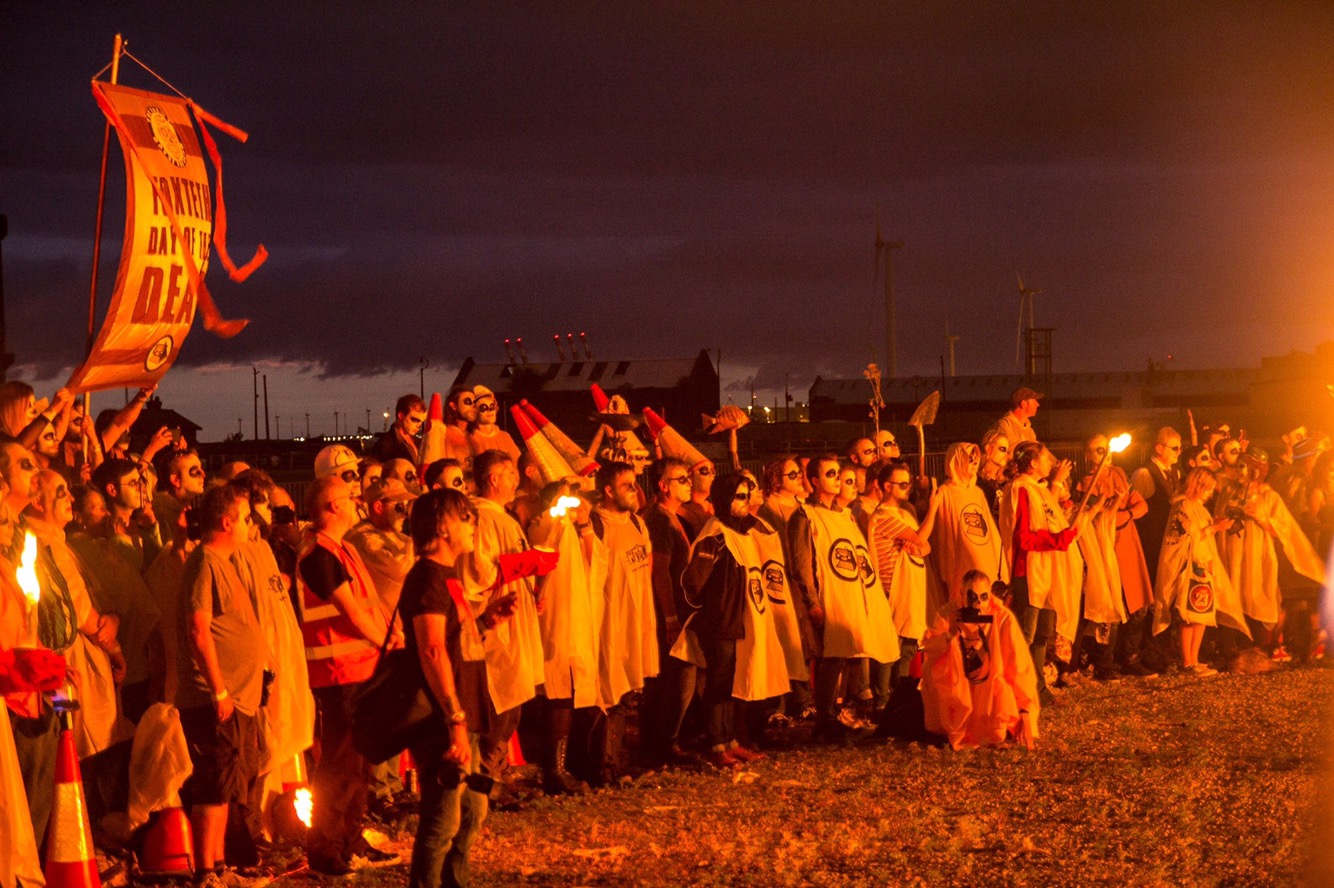 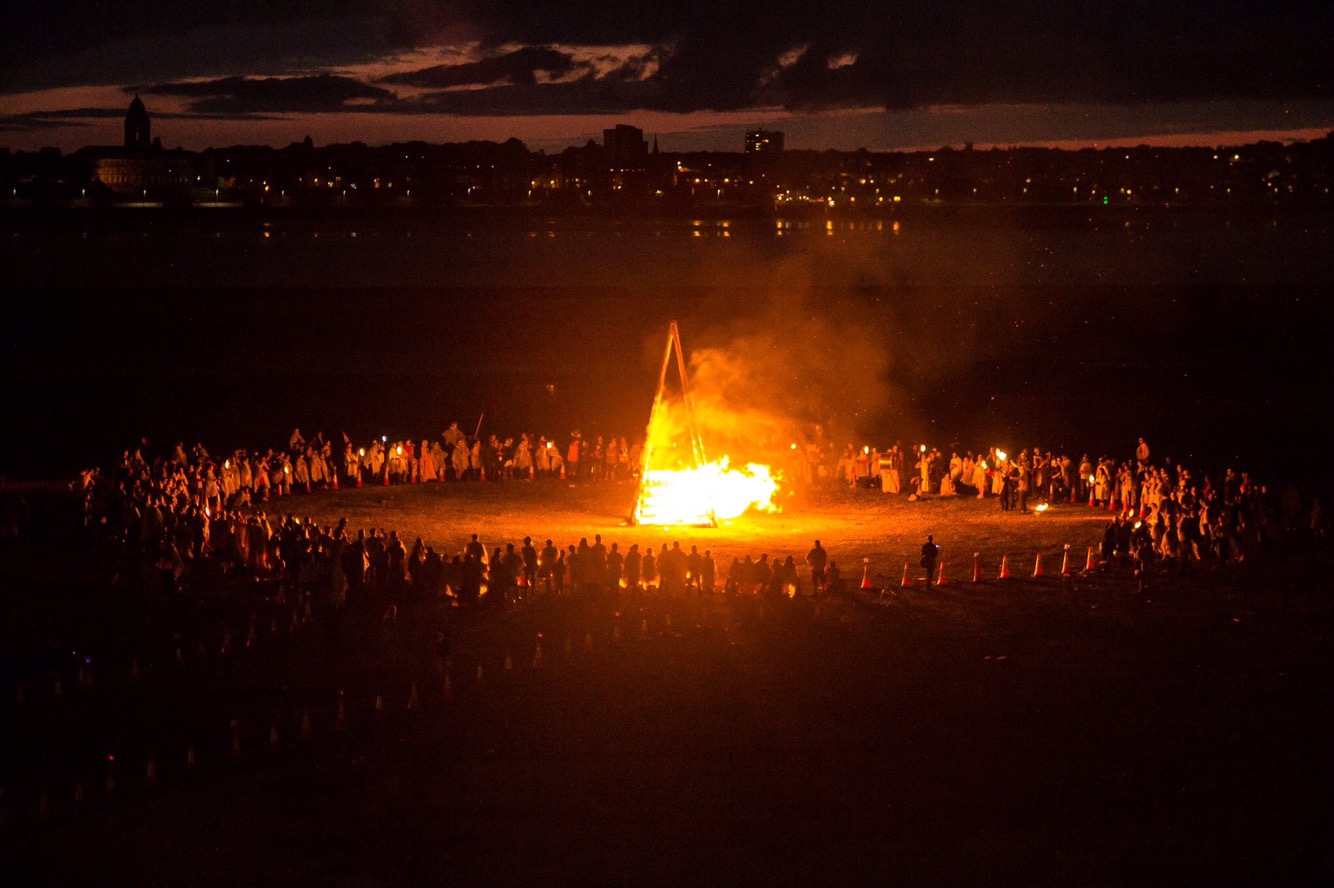 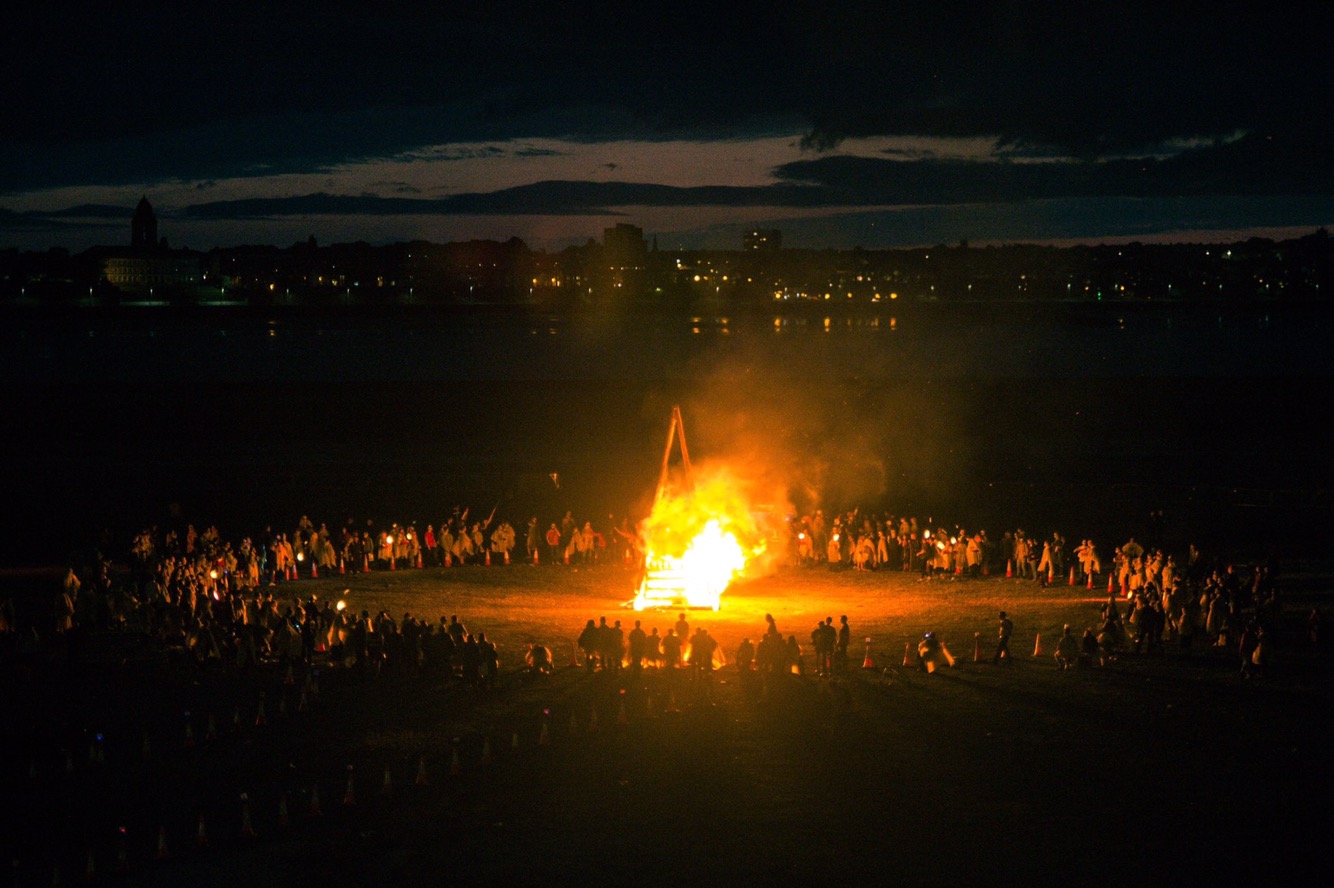 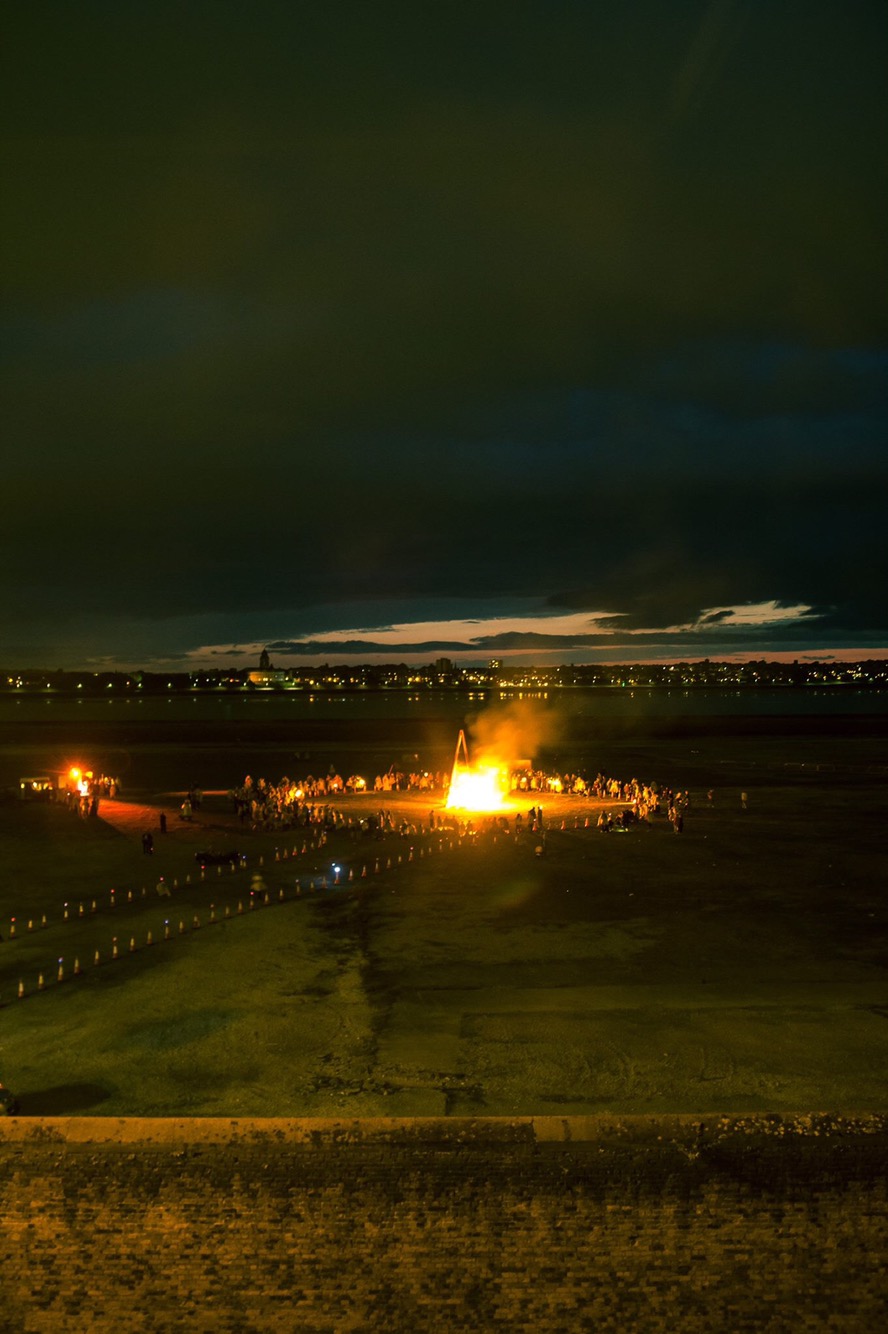 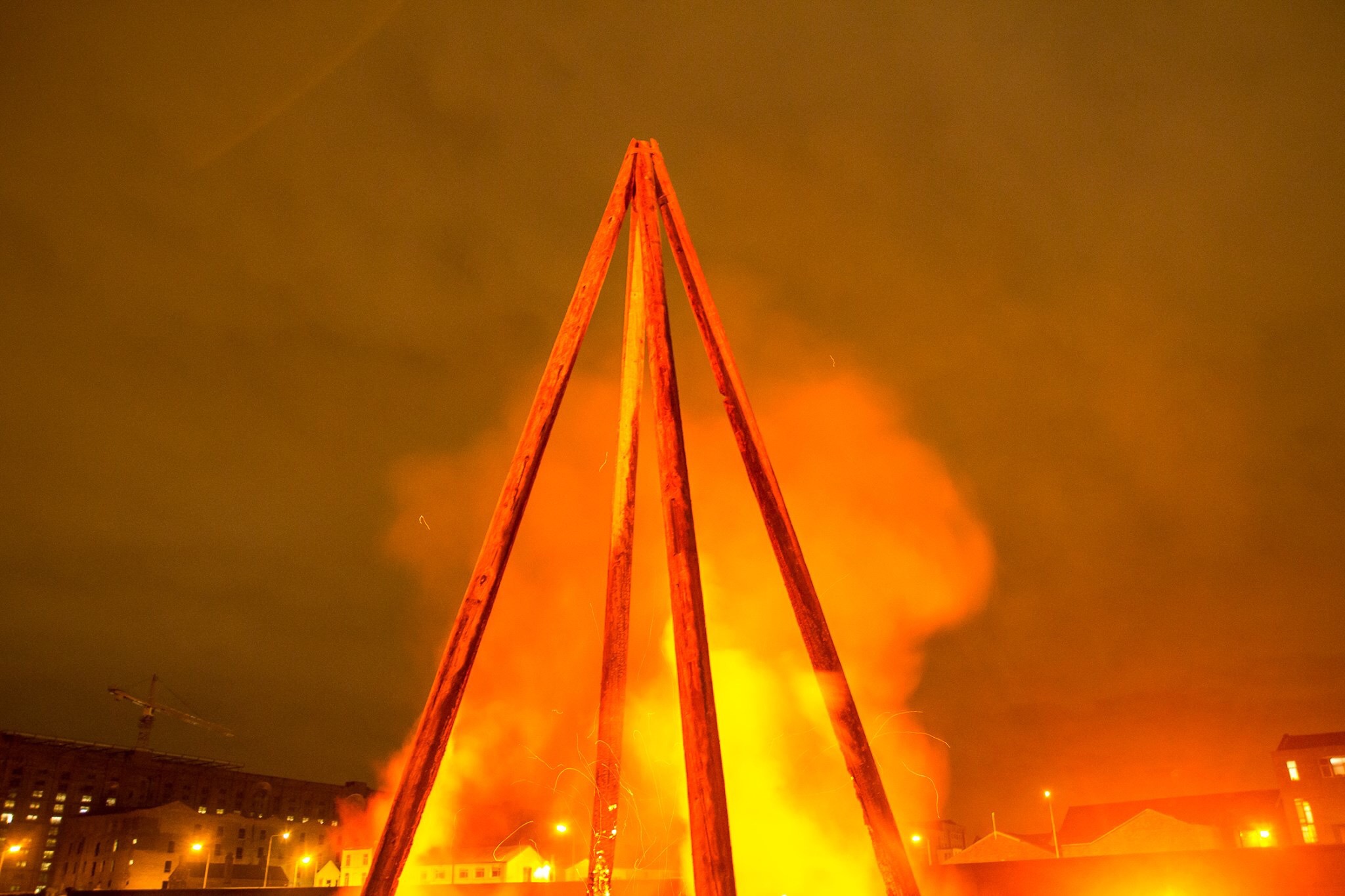 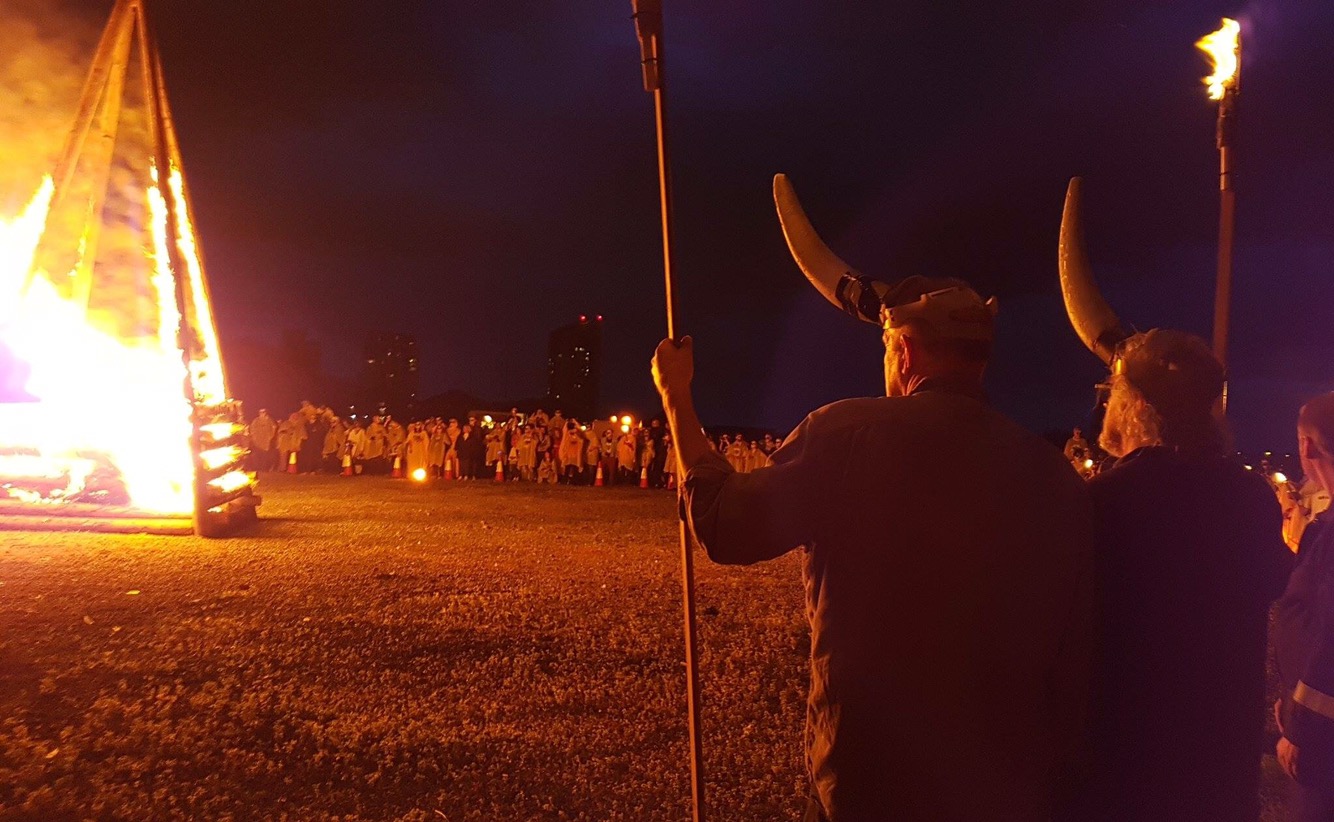 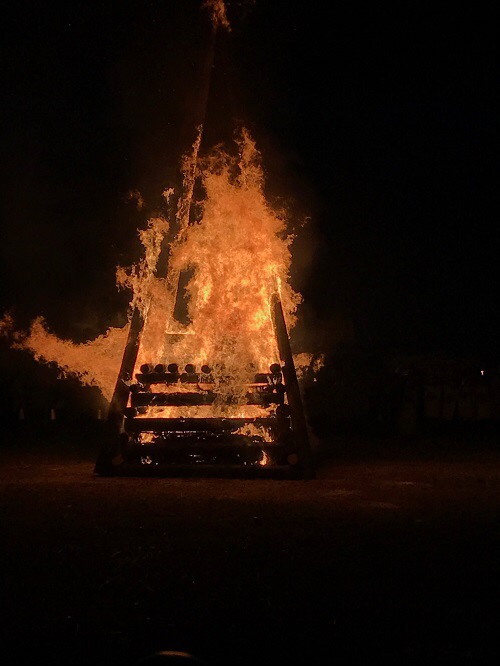 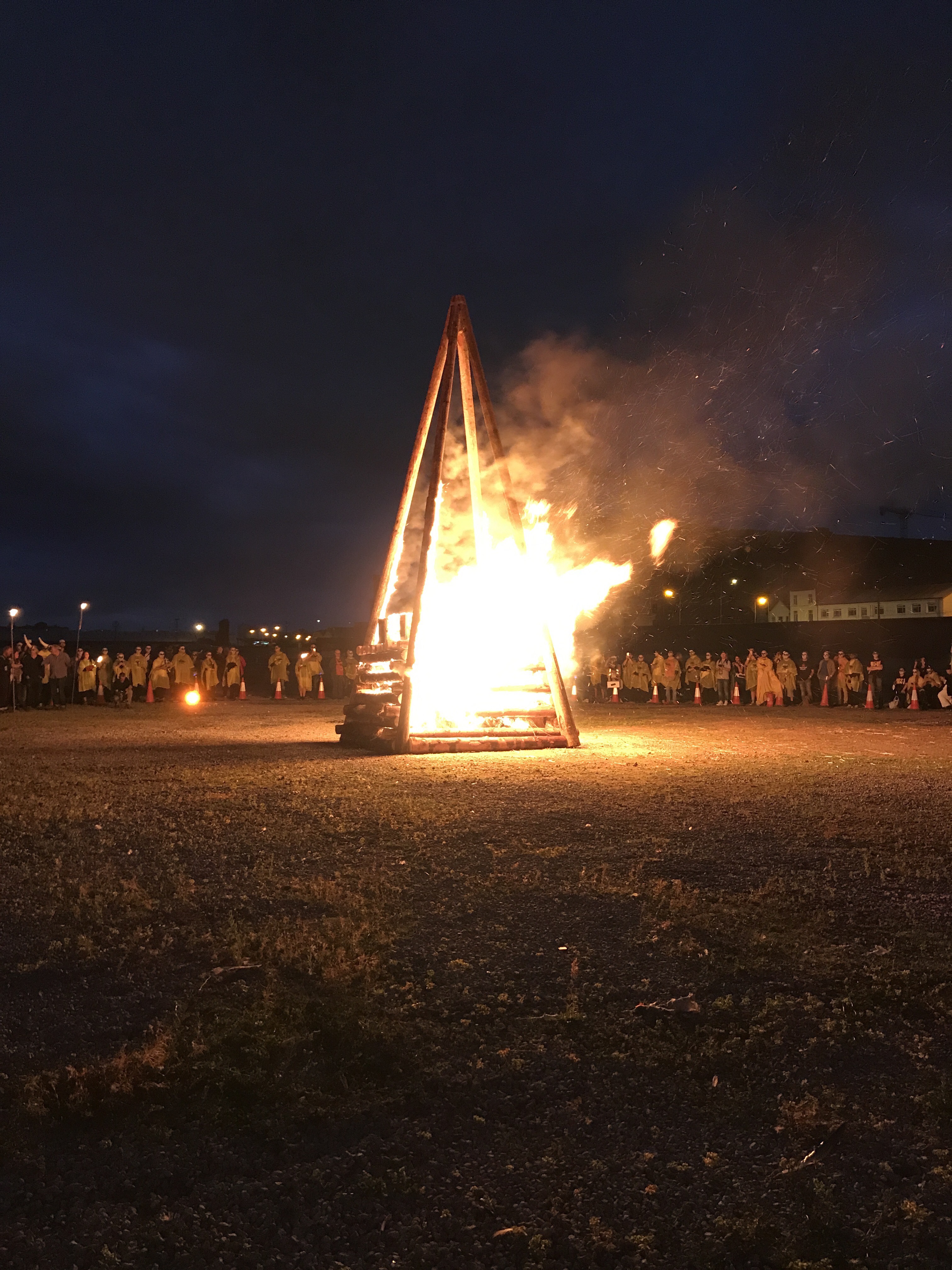 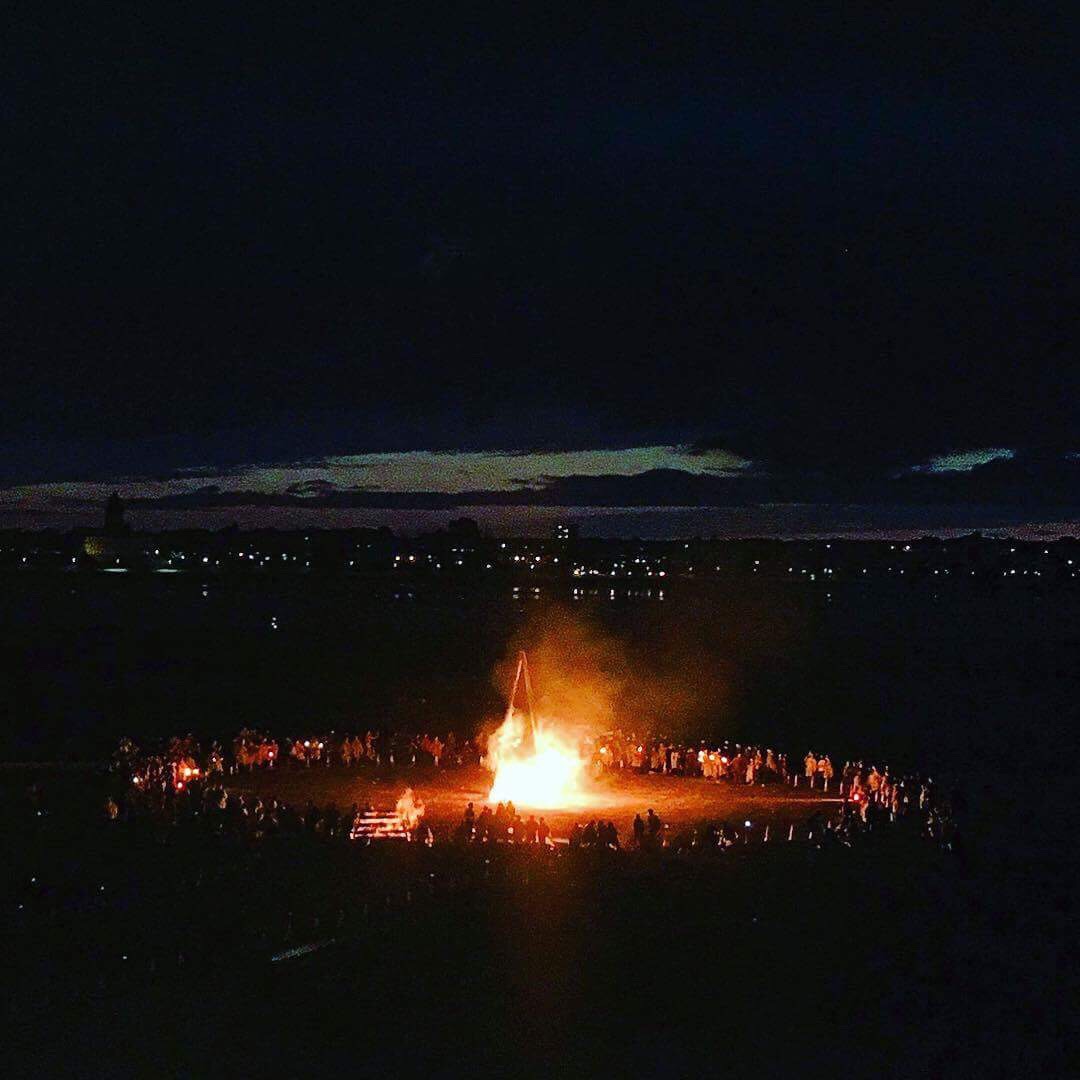 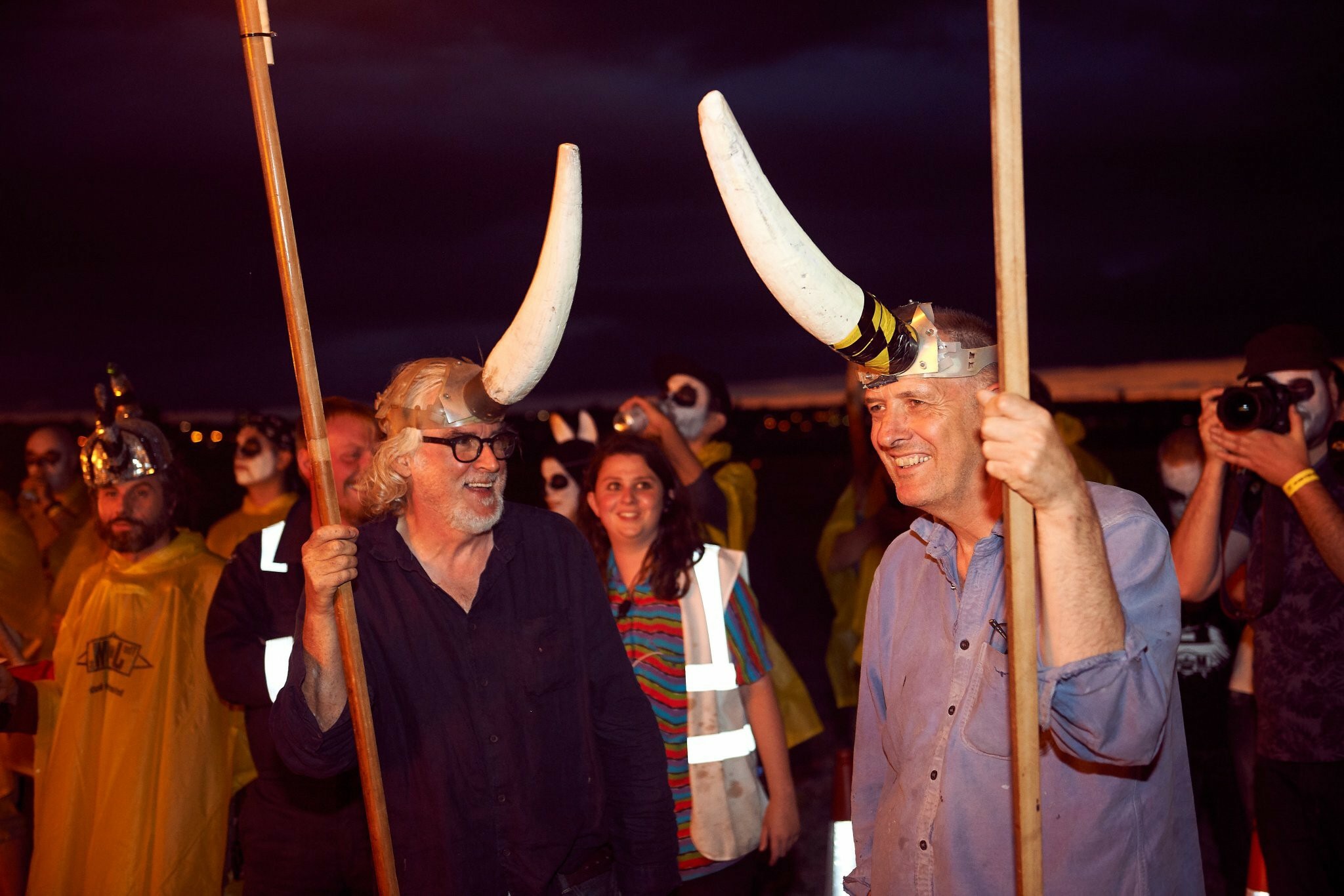 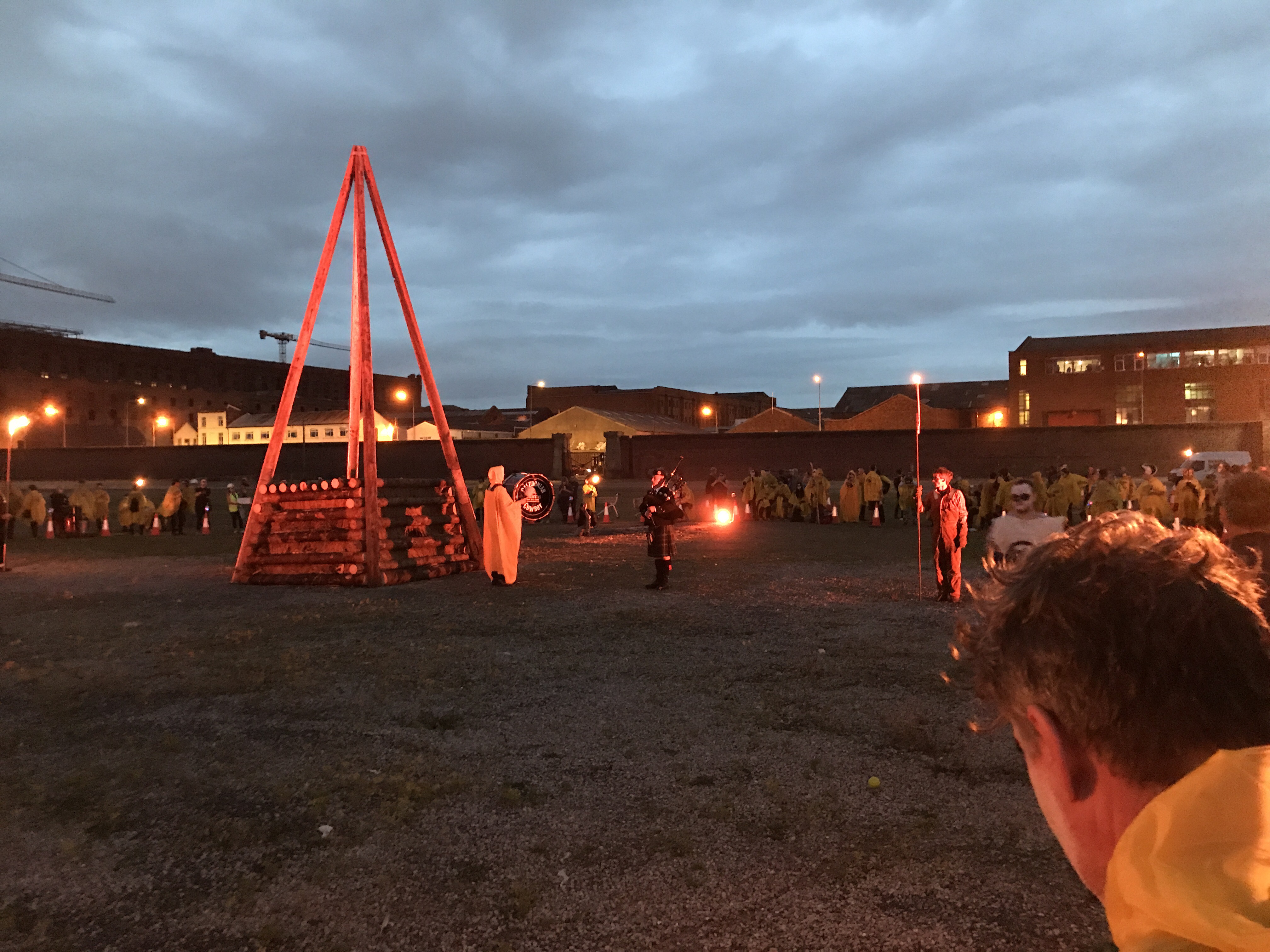 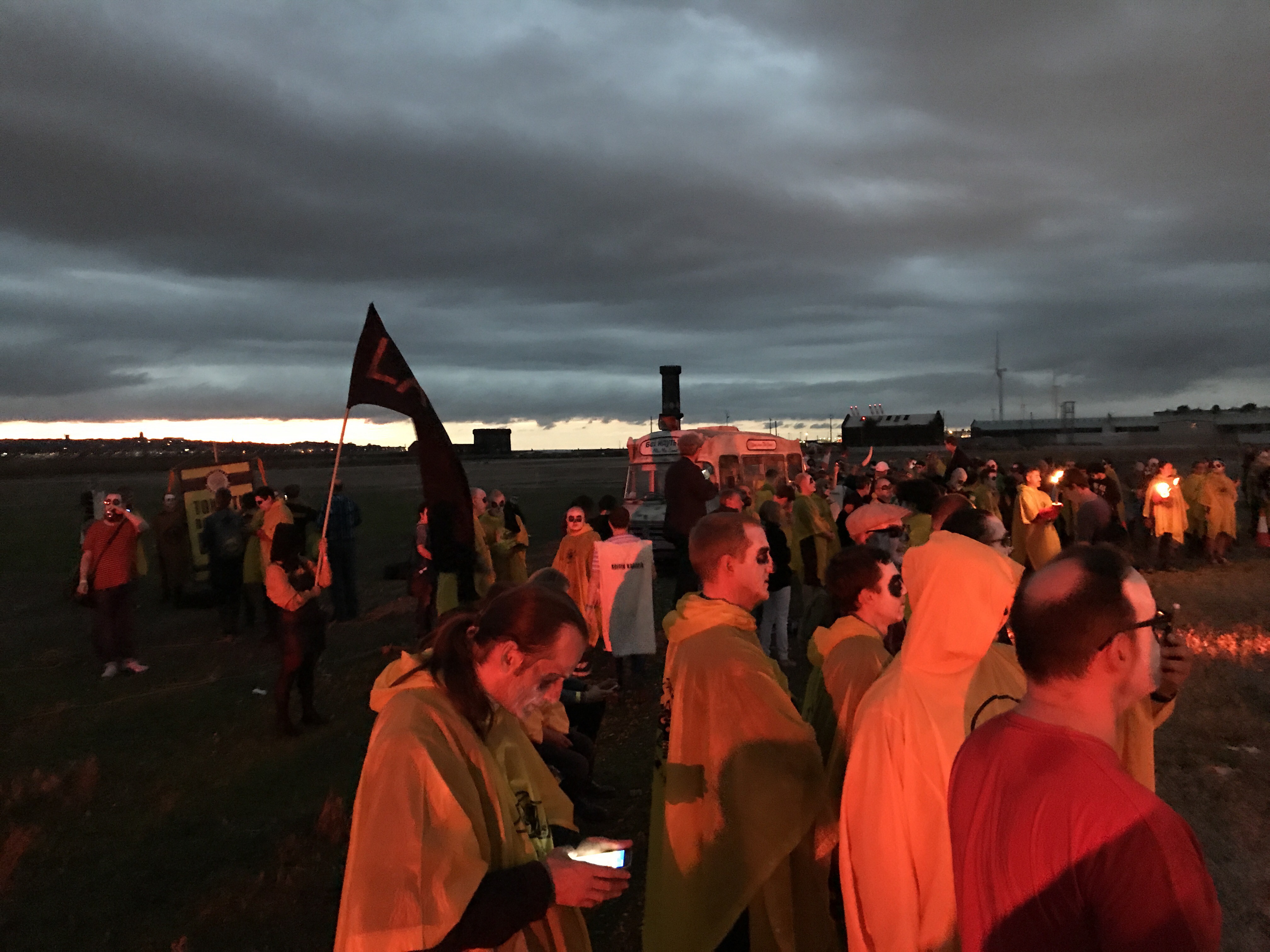 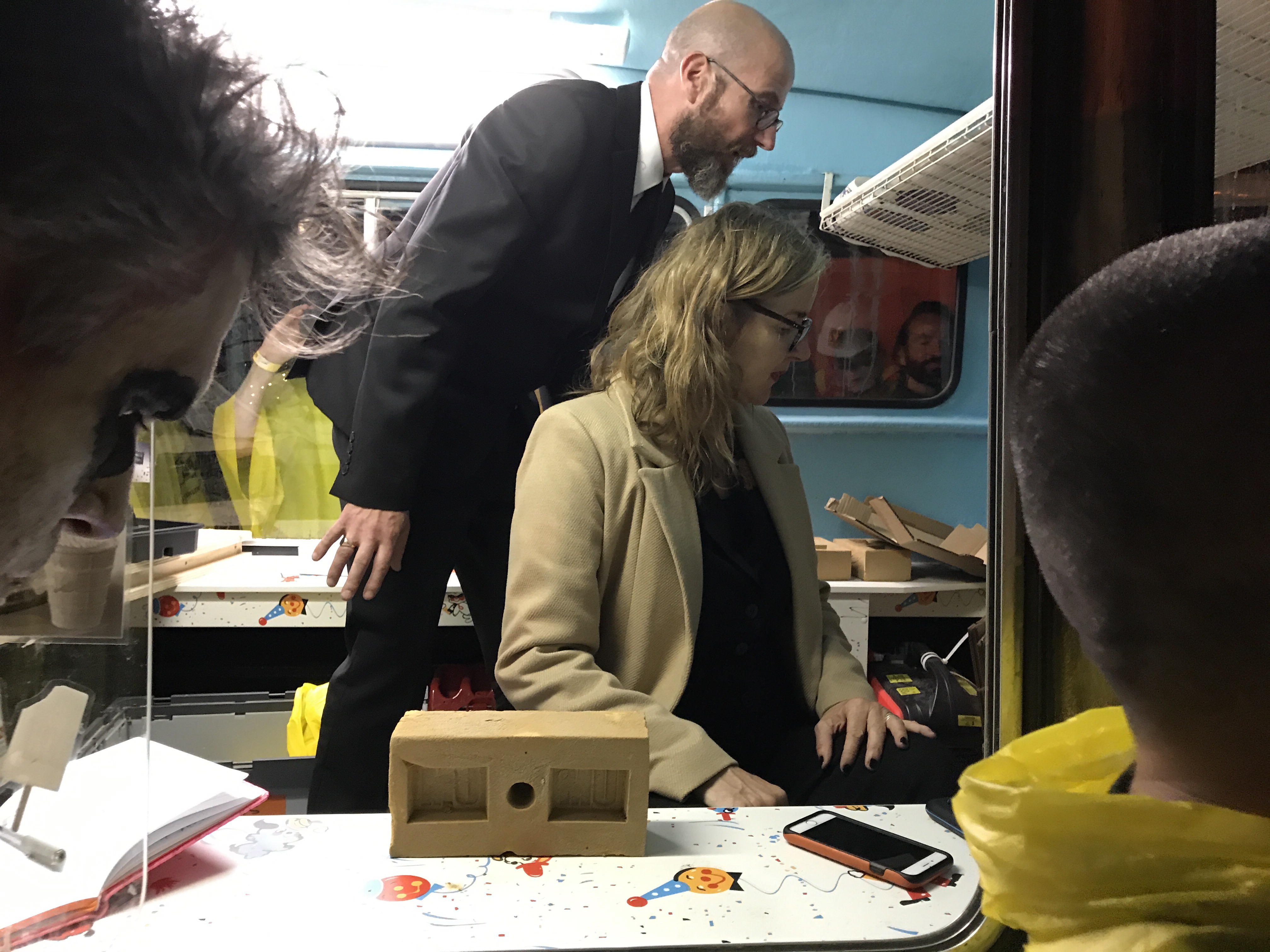