This is a text widget, which allows you to add text or HTML to your sidebar. You can use them to display text, links, images, HTML, or a combination of these. Edit them in the Widget section of the Customizer.
Posted on February 4, 2018February 4, 2018 by Page 130

All roads lead to Rome. Except, that is, the A23, which rather pleasingly takes you to Brighton and the birth place of The 400 Remix Project, two dozen fully paid up members of The 400, on a mission to do… something.

It started in October with a Dark Ages Fever Dream, you know, like the ones you had all through September and maybe even last night. In the dream The Officiator was reading out the names of The 400 Pageholders at a service station in the driving rain, accompanied by a hard, but minimalist techno beat. I posted about it. And made a picture.

Then a couple of weeks later, Lisa got in contact. Was I still interested? The Officiator was keen… 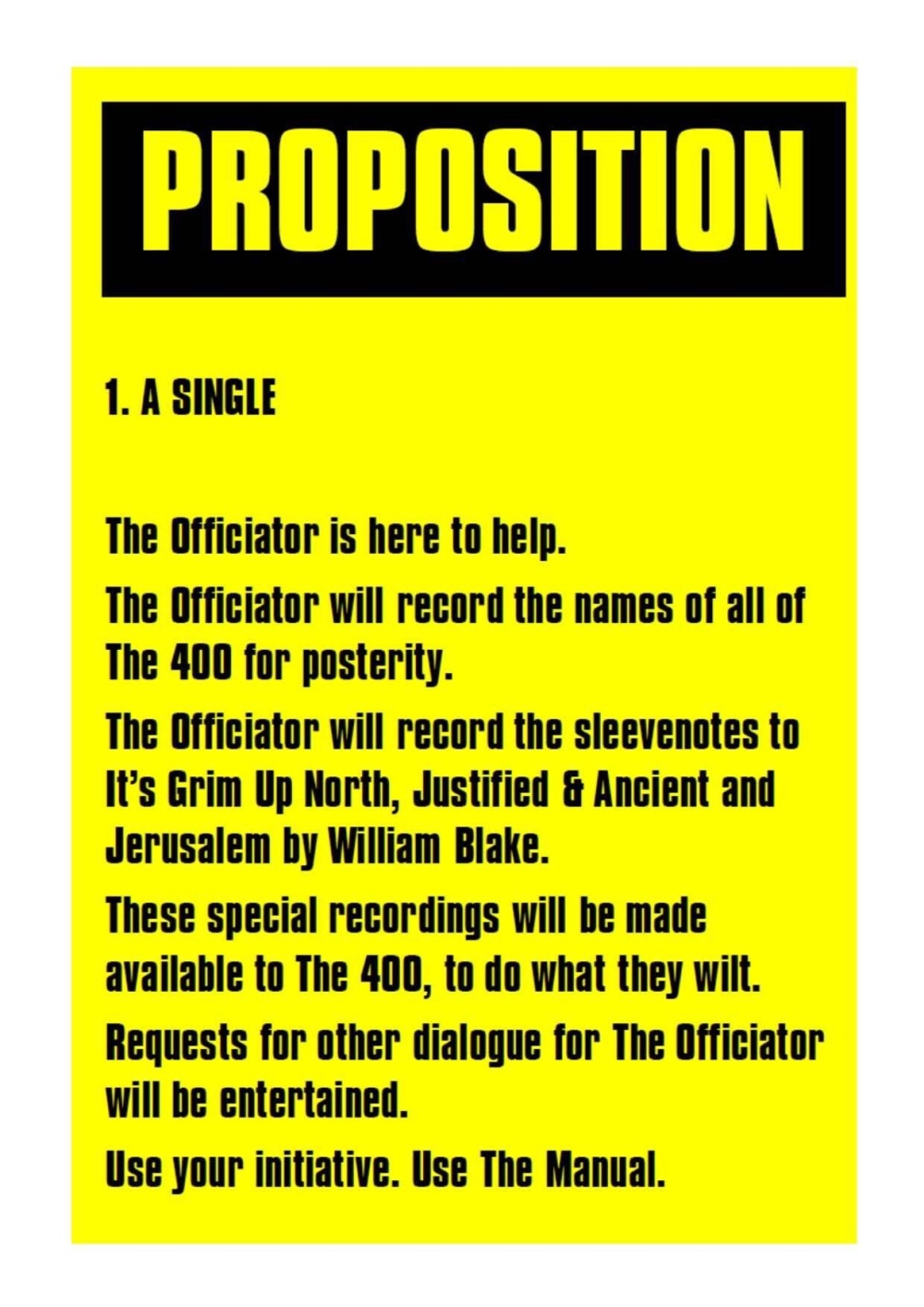 Within the week and via a few propositions, the project was born. A single featuring all the pageholder names, would be 23 minutes long. Too long really. So the chapters were divided among the the new volunteers and The 400 Remix Project began to work.

Oliver was booked and the date of February 3rd was agreed. Imaginations went into overdrive, requests for The Officiator flooded in. 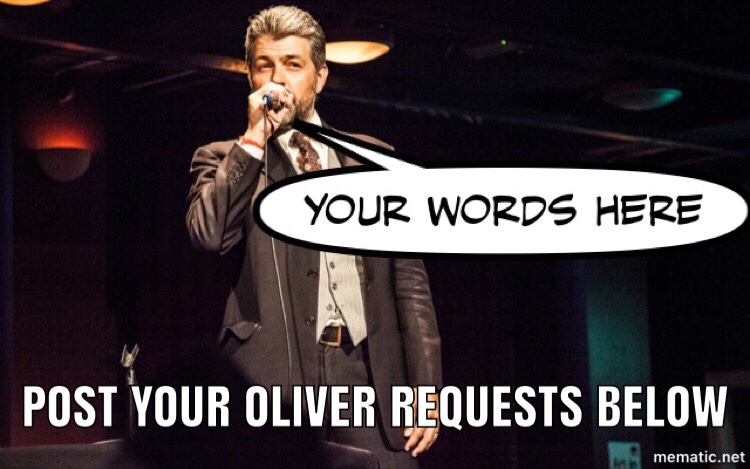 And so on Friday evening I found myself making the 3hr23 drive down to Brighton, clutching a 20 page script, some copies of Whatever and a special gift for Oliver.

The studio owner and The 400’s own studio magician very generously put myself and Guy up in his home for a couple of nights. Talk ranged all the way from WTTDA to BTS via pyramid schemes and secret projects. Then to get us fully in the zone for the studio we watched Dave Farness’ epic Dark Ages movie. It was only the third time if watched it and the first time I’d watched with people who knew what the fuuk was going on.

Up bright and early, we headed into Brighton early for a constitution strengthening full English in Kemptown, right by Sam’s Lucky Stone Studios.

Signs were improvised and we awaited the arrival of Oliver and a few other interested parties who had made the journey down to the coast. 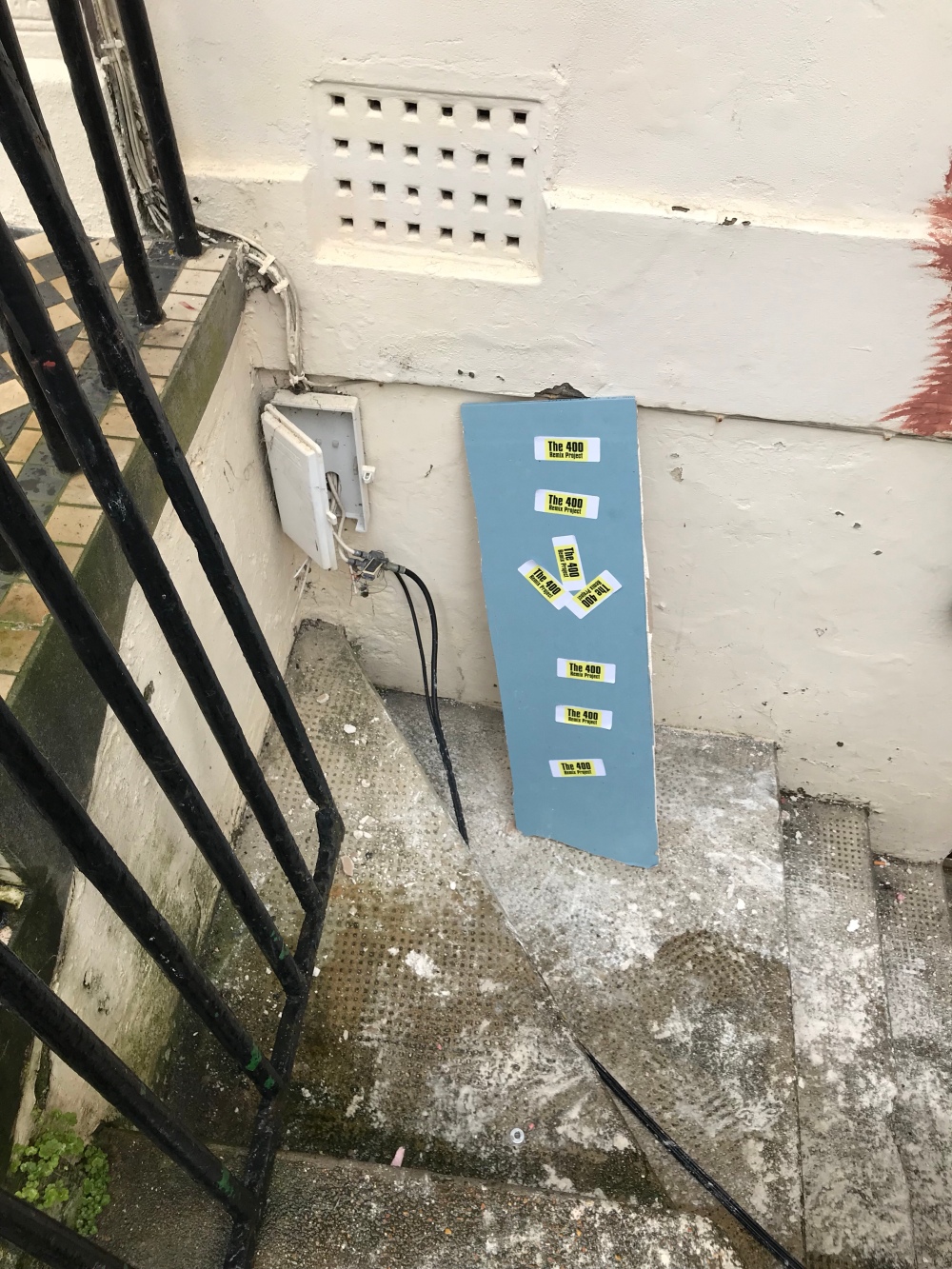 Sam ran the desk while myself and Guy ran the recordings. We were initially worried that we would run out of time to record everything, but Oliver’s outstanding professionalism soon put us a ease as he rattled through The 400 pageholder names in 23 minutes. As to everything else that we recorded, well you will just have to wait, but I can say that you are in for a treat.

We finished Oliver’s session with some rousing chants including BRING BACK MINCE PIES – Christmas Number One? – and then said our goodbyes to The O, but not before posing for a team photo.

Then it was back into the basement for some instrumental work including an incredible performance from Bela that will close the project. 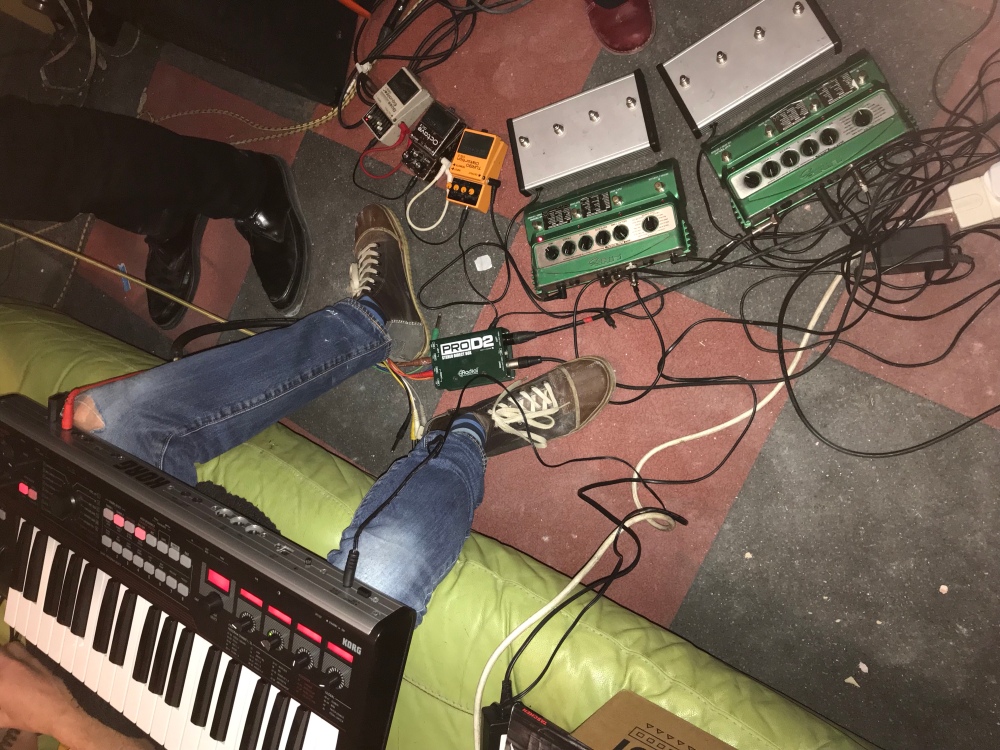 Then, satisfied with ourselves like a Ragwort Collector with a full bin bag, we retired to a lovely pub around the corner, The Hand In Hand.

There we met Matt who was quietly enjoying his Julian Cope book with a pint before we turned his night on it’s head.

He was in Brighton to get a Jimmy Cauty print framed and he had followed Welcome To The Dark Ages from afar and bought all the merch too.

Seizing on the opportunity to Find An Other, we invited him to join us where he became that rarest of people, a non-400er who wants to talk about it. The circumstances that brought him crashing head on into one fiftieth of The 400 in a cosy little pub are beyond coincidence and I marked the occasion by making him one of the esteemed Stampees of Whatever.

A fantastic weekend spent with fantastic people. Catching up with Scaramanga Silk I reported that the day had ‘wildly exceeded expectations’. We hope what comes next does too. Until then… 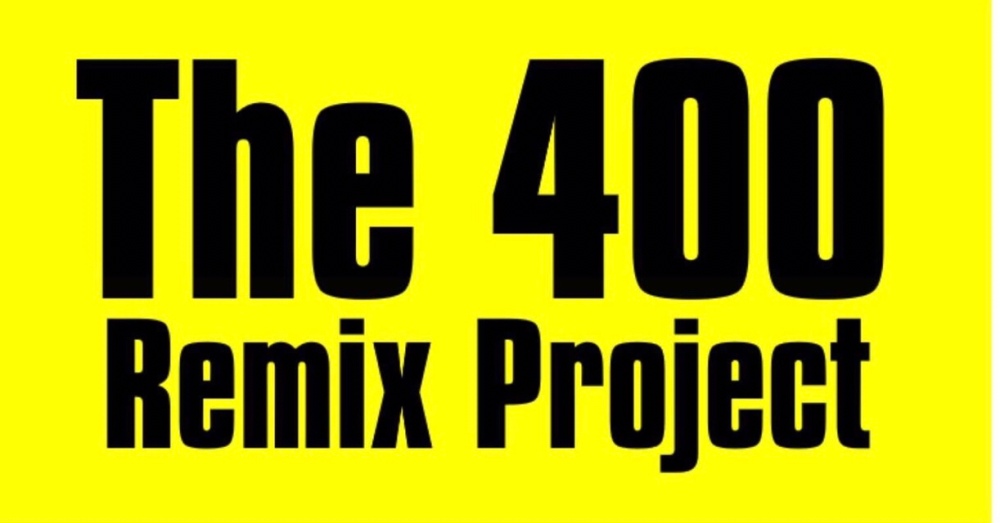