This is a text widget, which allows you to add text or HTML to your sidebar. You can use them to display text, links, images, HTML, or a combination of these. Edit them in the Widget section of the Customizer.
Posted on August 24, 2018August 24, 2018 by Page 130 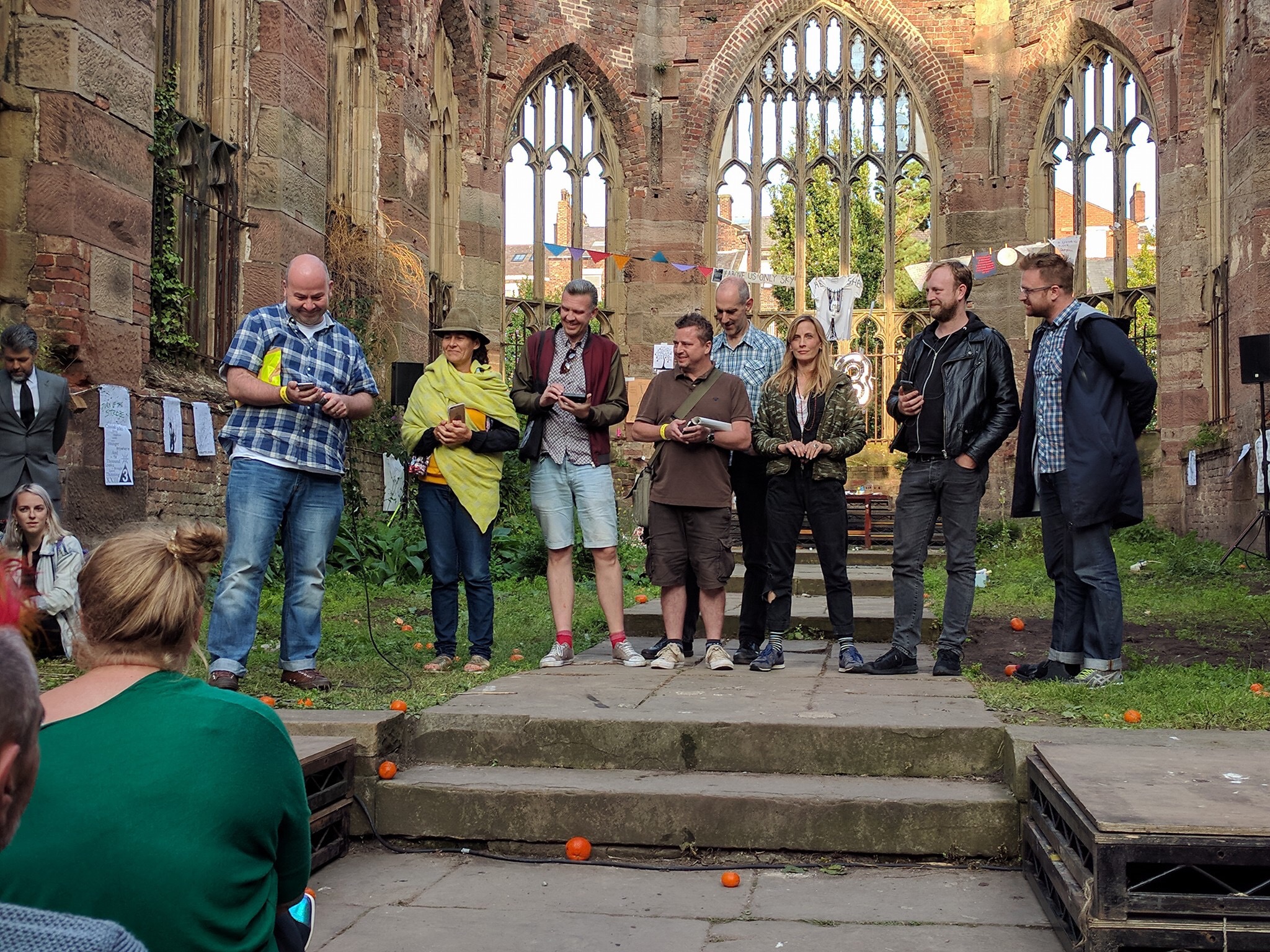 Day Two was ‘a reading’.

Day Two took us from Day One to Day Three.

Day Two took us from here to there.

Day Two was the Heart Of The Dark Ages.

Day Two started at 10am on the steps of The Bombed-Out Church. St Luke’s had dominated the Dark Ages skyline so far, visible from everywhere we were sent.

After a drive by from Ford Timelord, the chimes we had heard for the book stamping returned and we were ushered into The Bombed-Our Church and directed left or right into two long lines along the ‘aisle’.

When we were all in, with the lines snaking back up the church, Oliver entered, followed by The JAMs and there DPM bodyguards, Aden and Kaim.

Oliver read a few less than complimentary reviews from Amazaba and the pages of two copies of 2023 were torn out and given to The Volunteers. Bill, evens on the right and Jimmy, odds on the right. 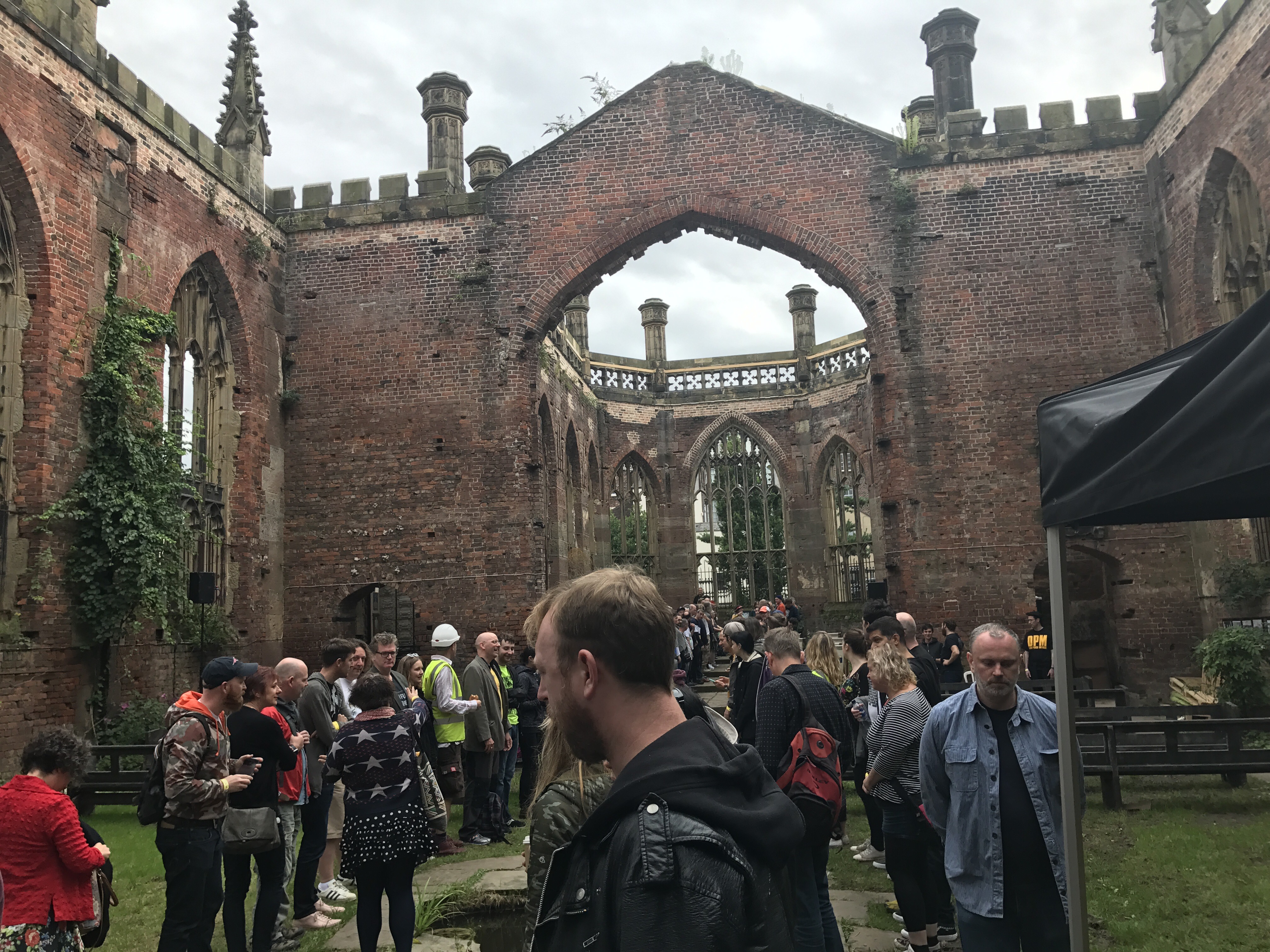 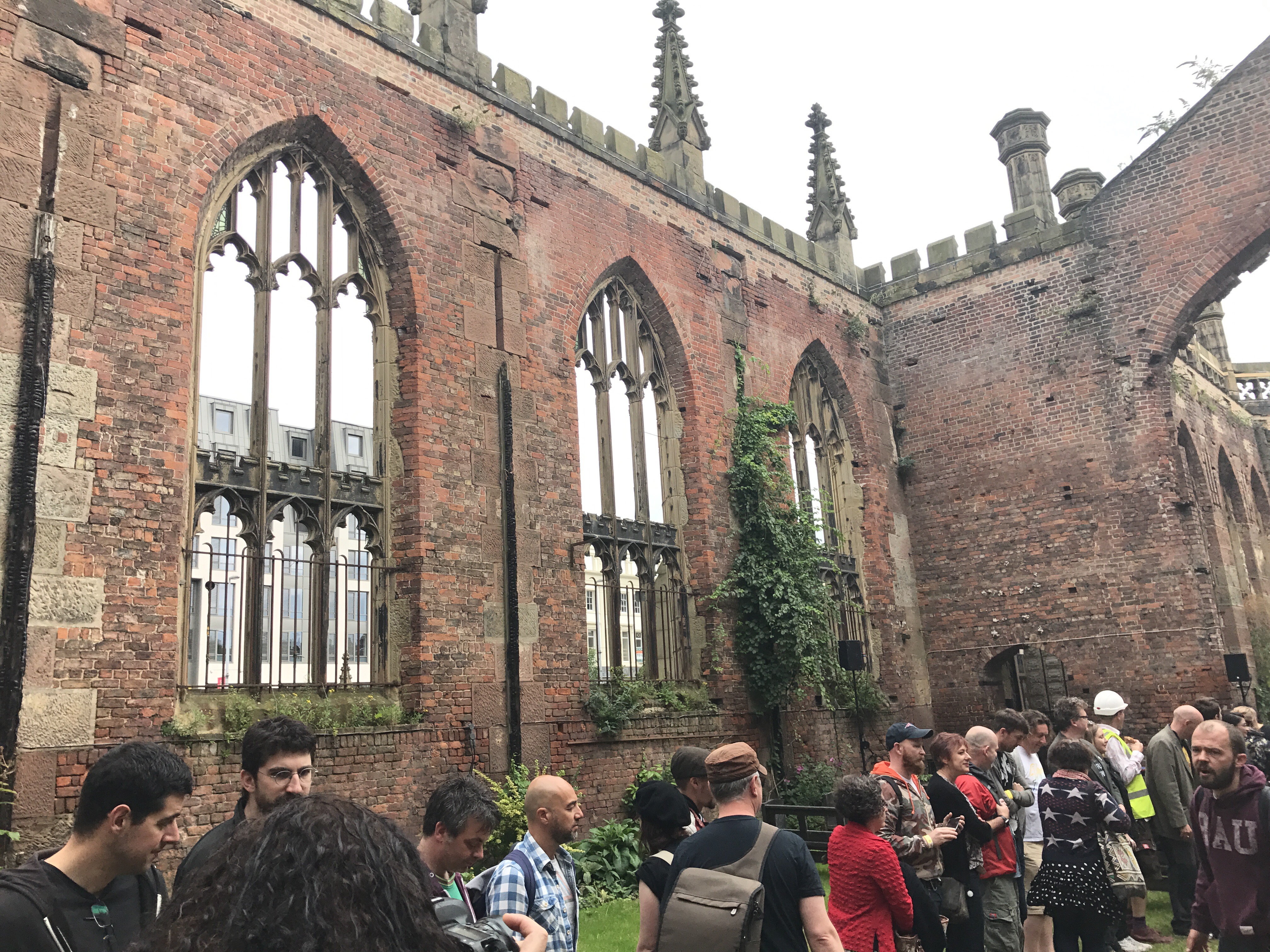 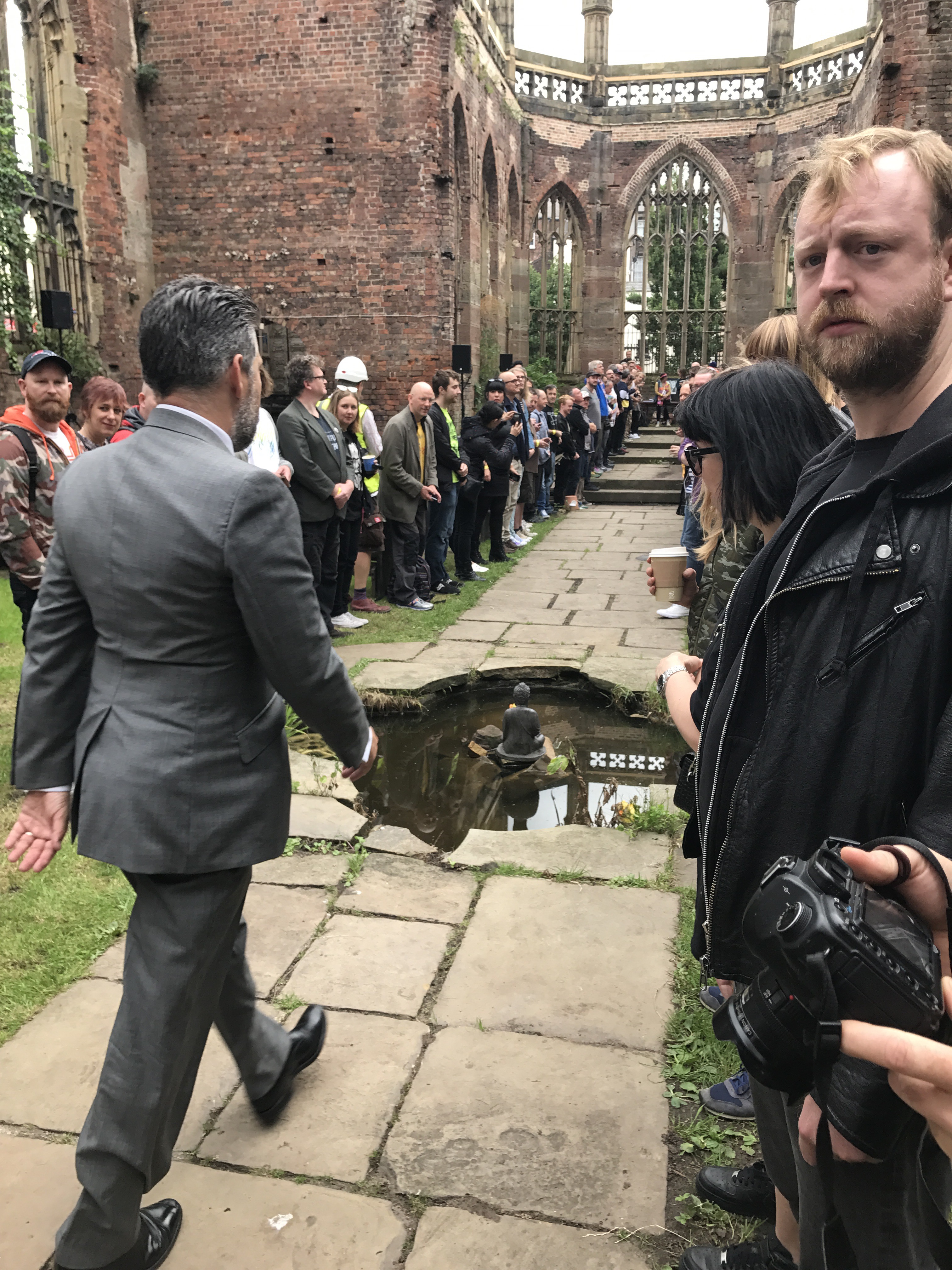 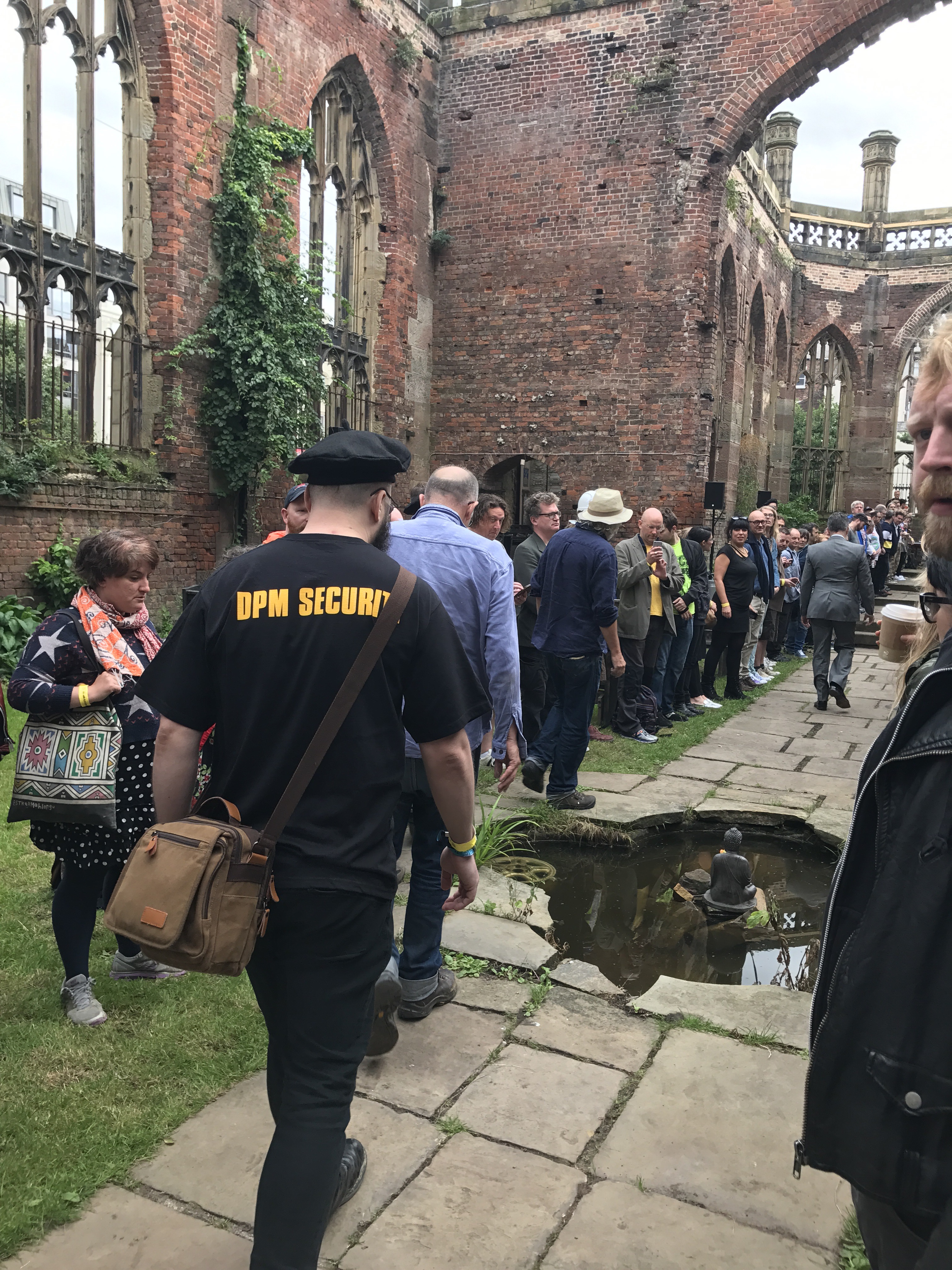 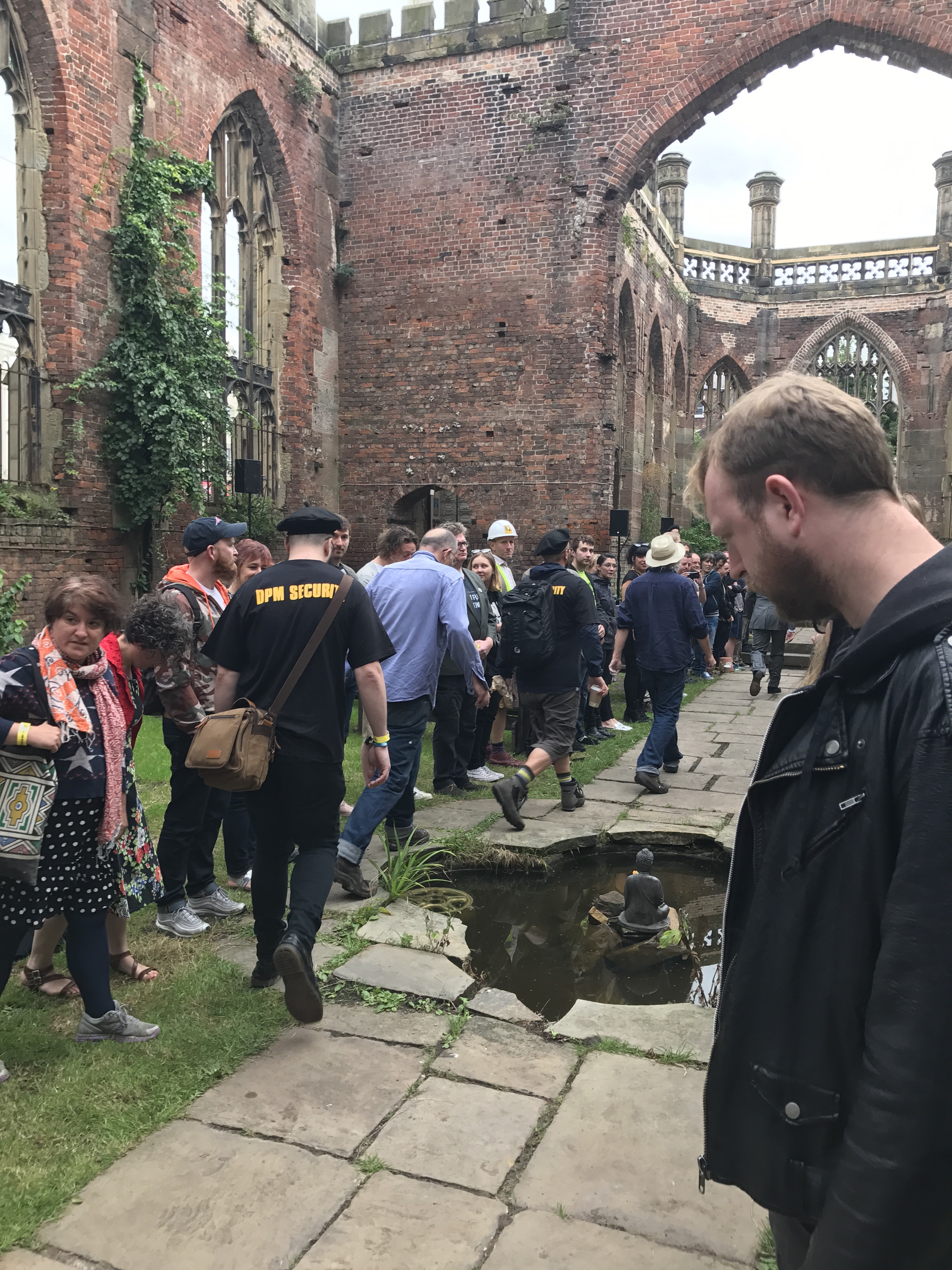 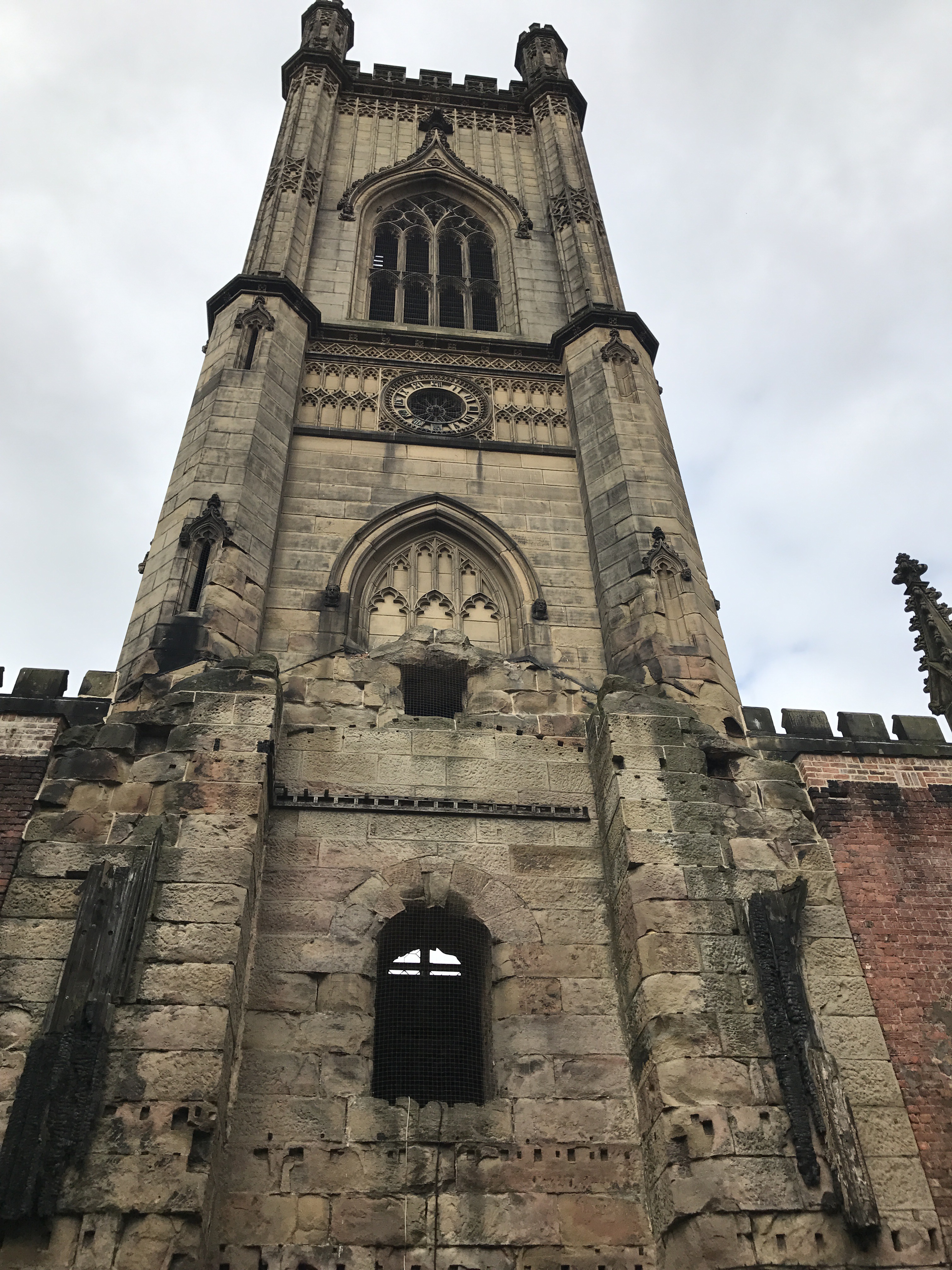 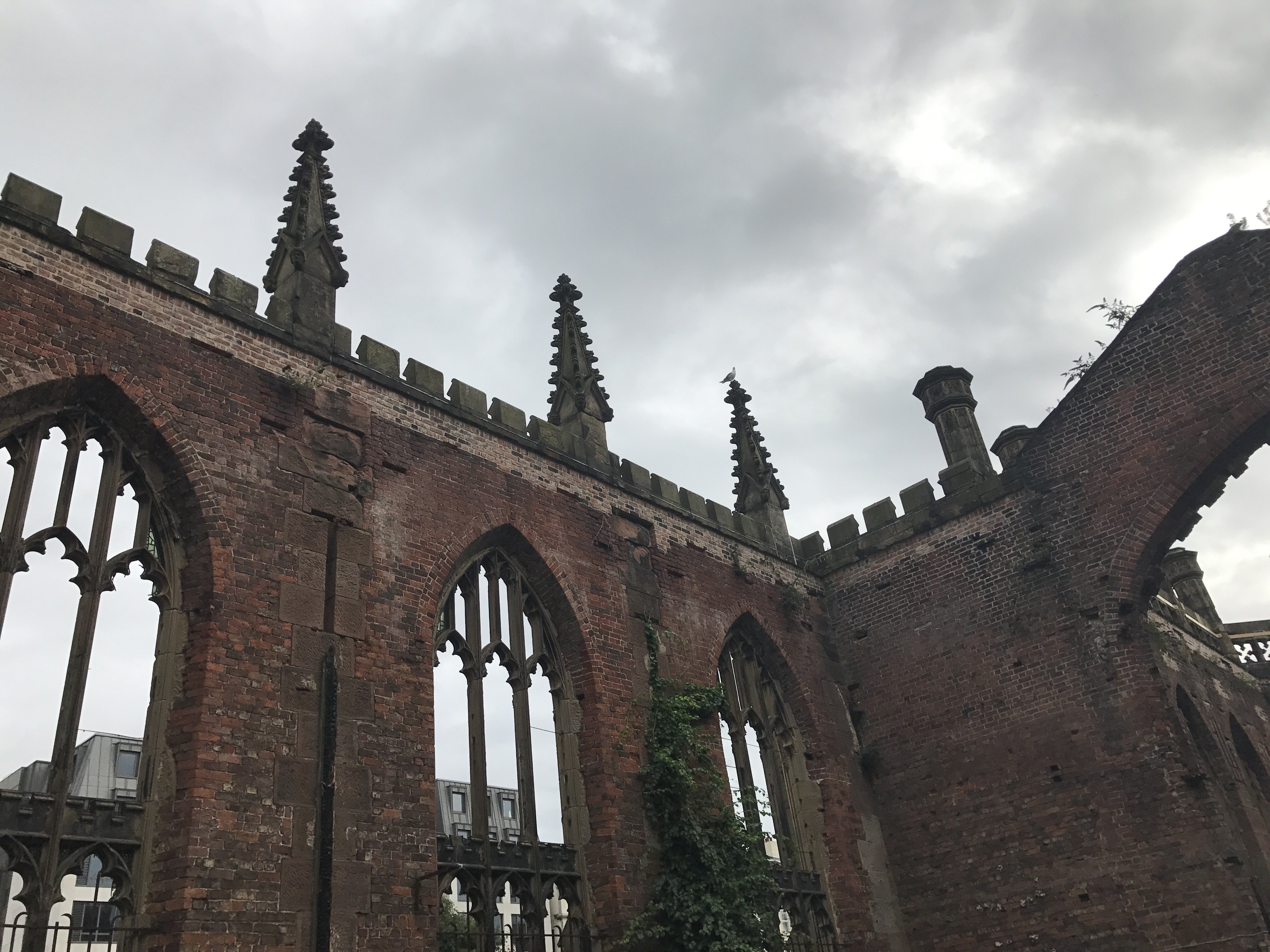 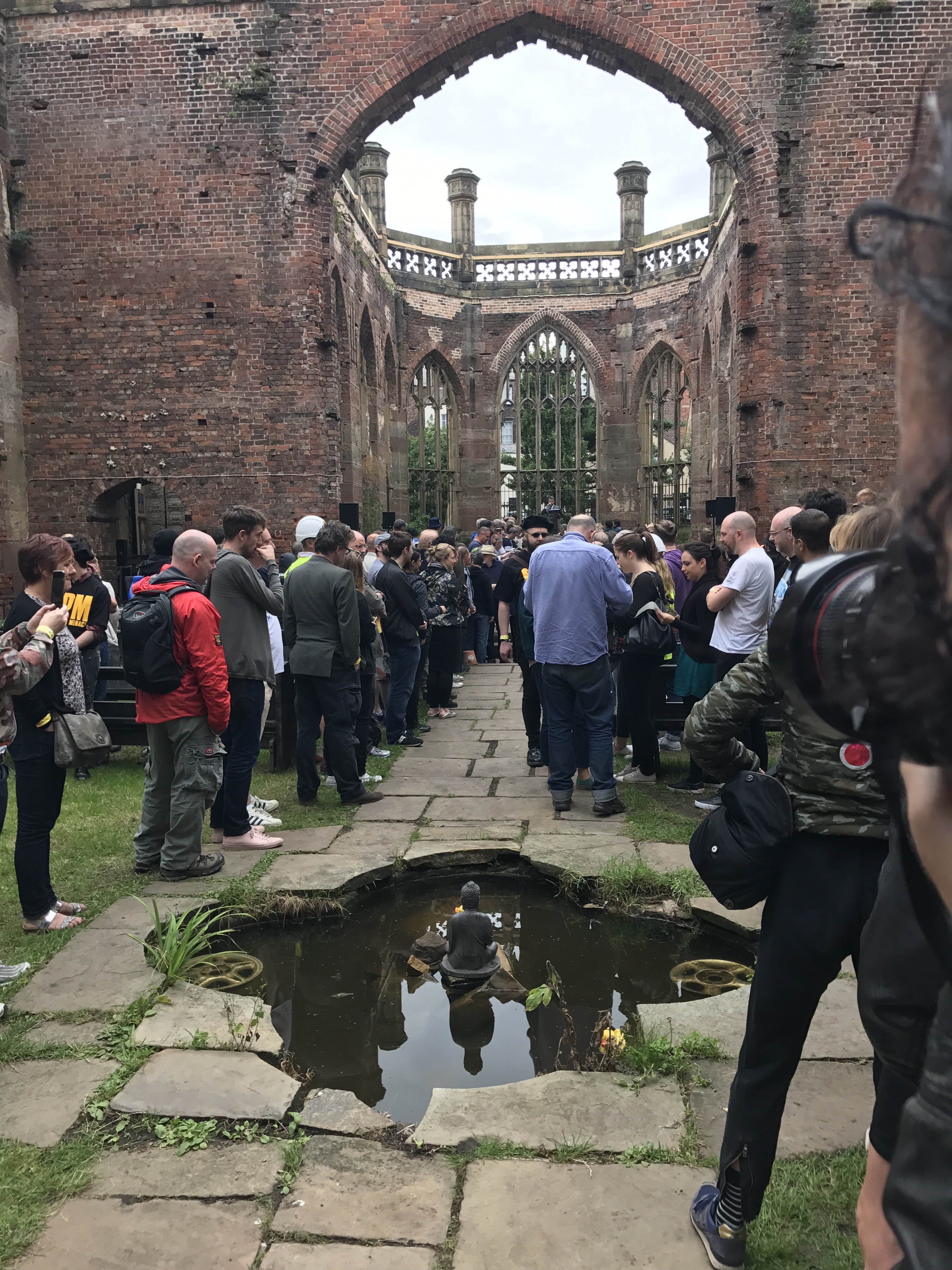 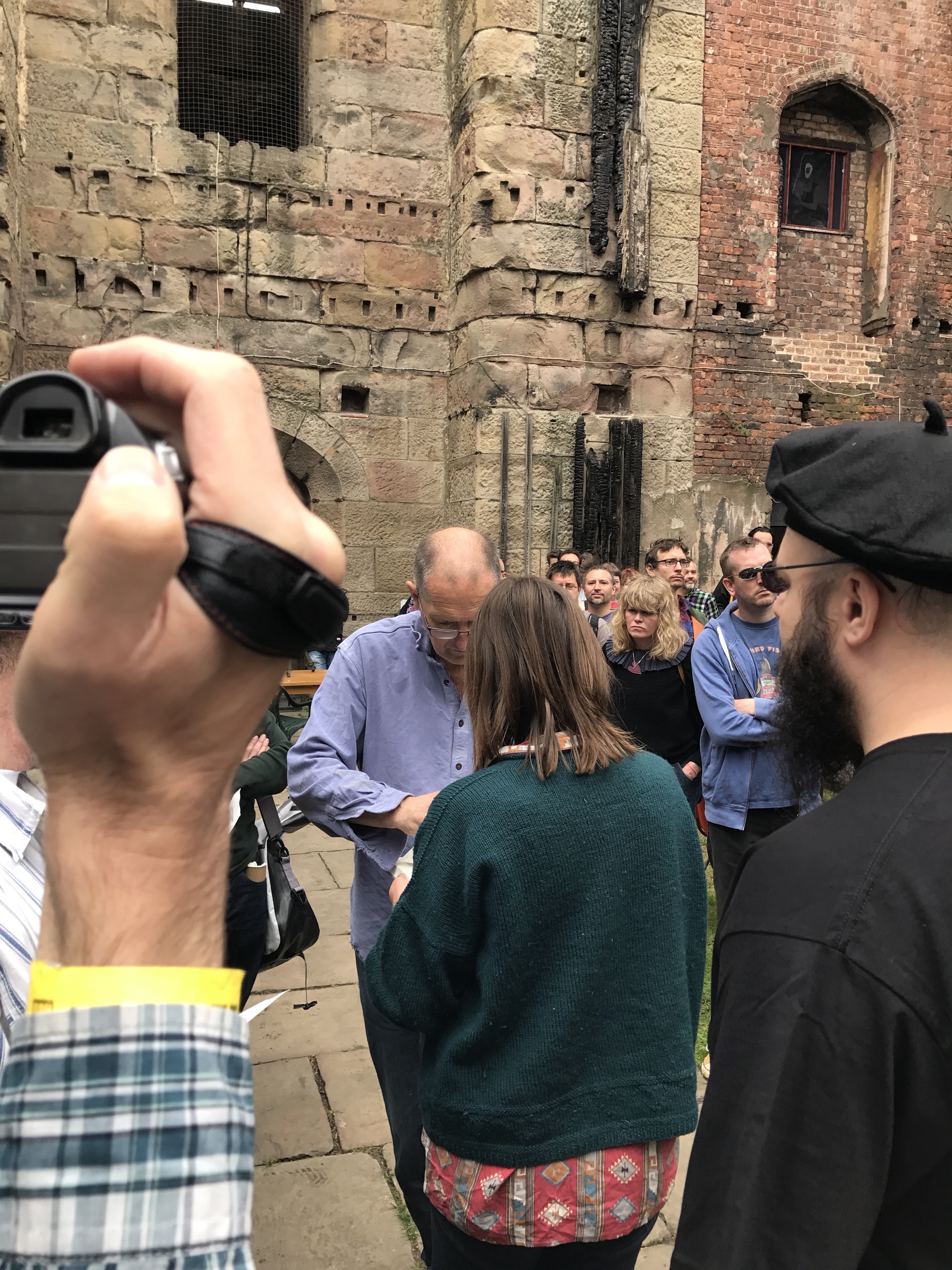 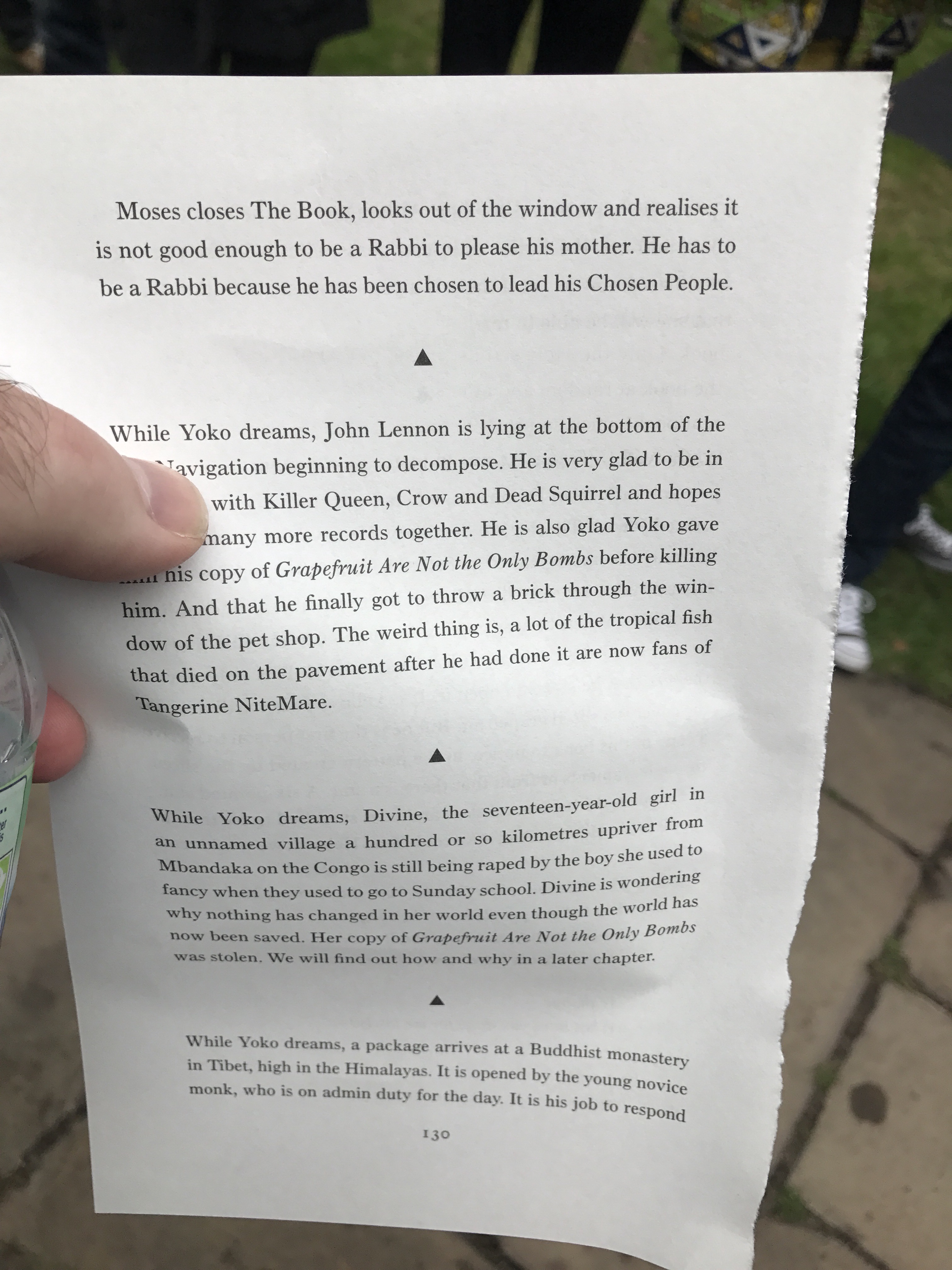 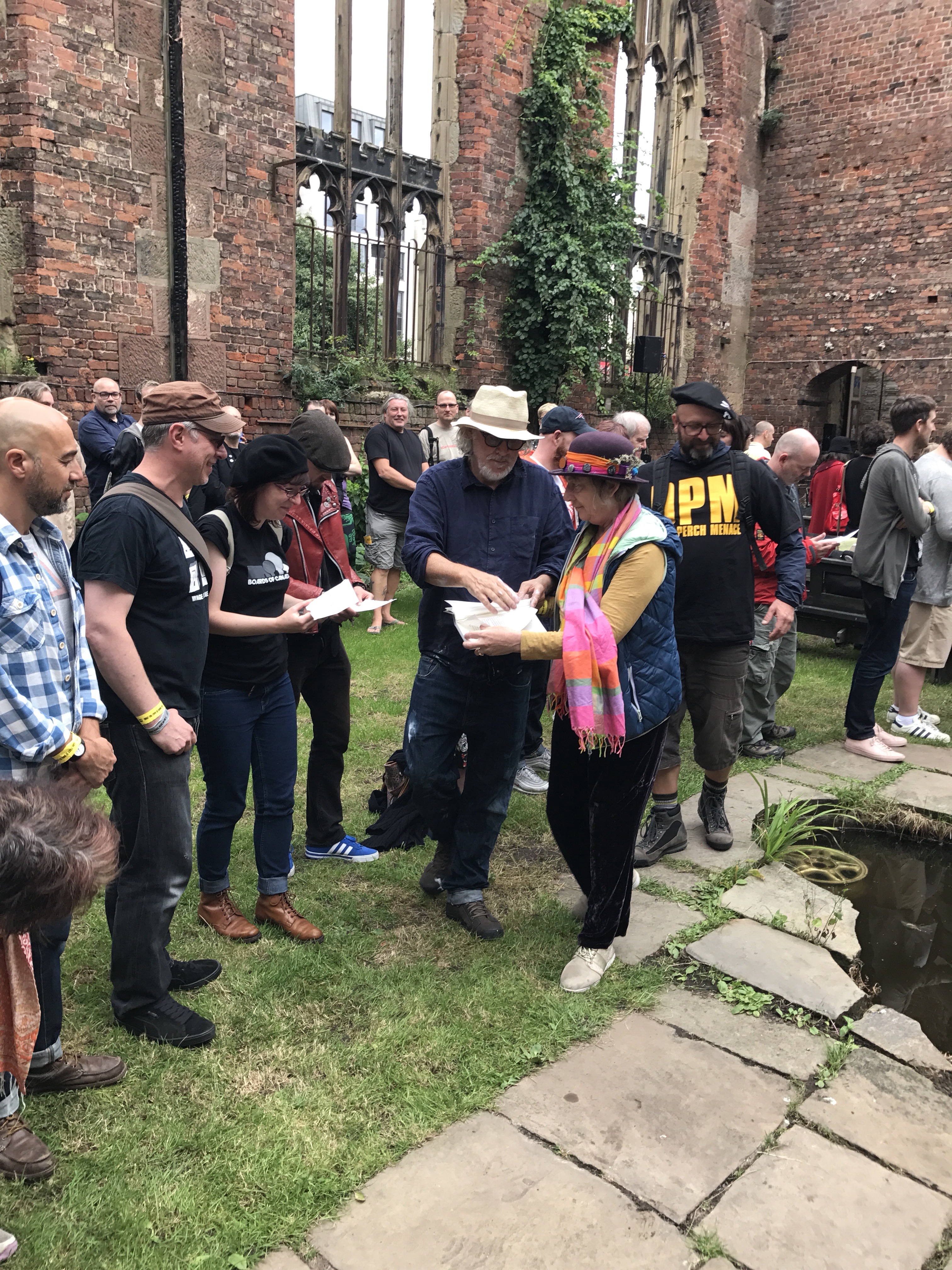 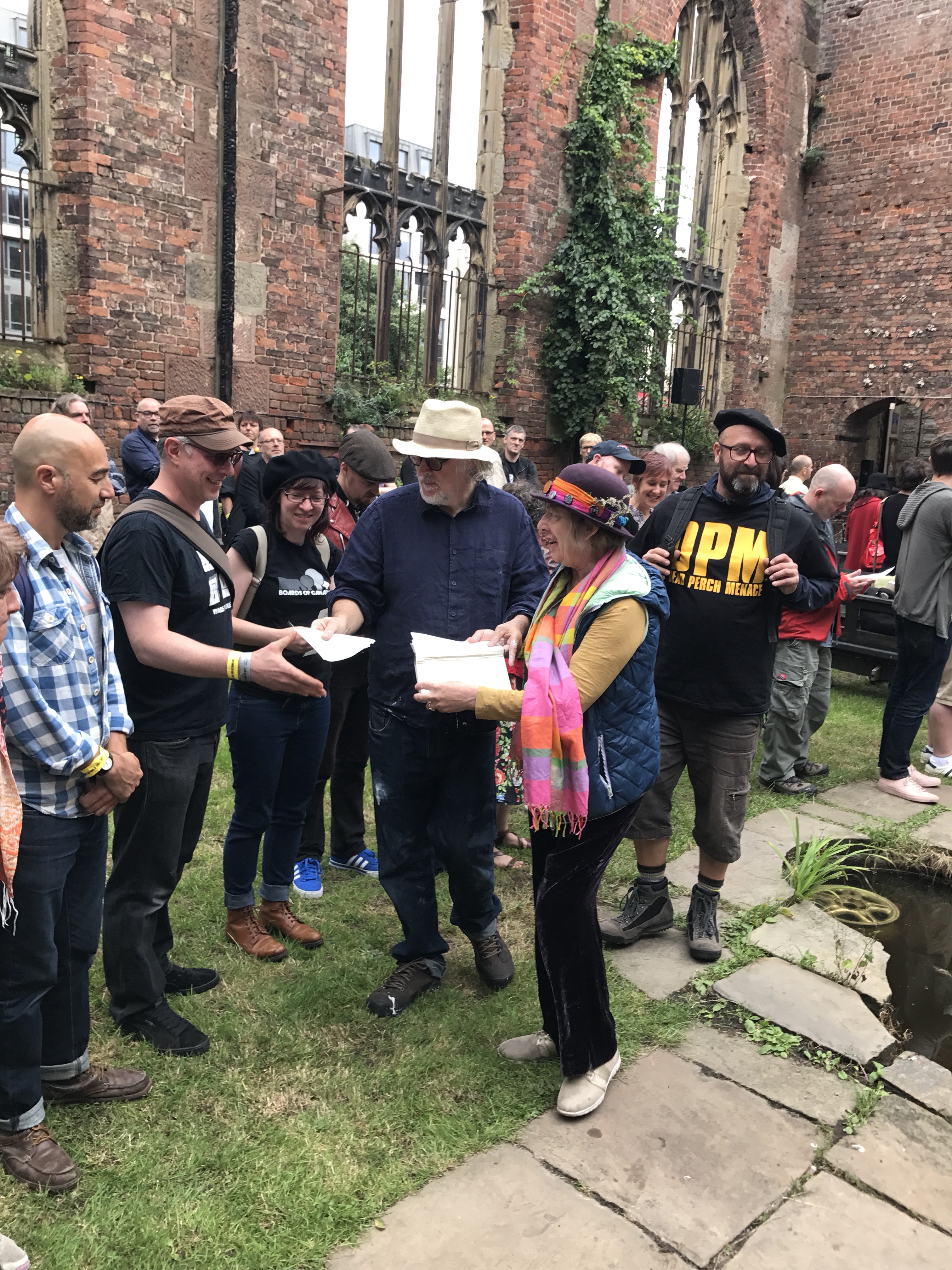 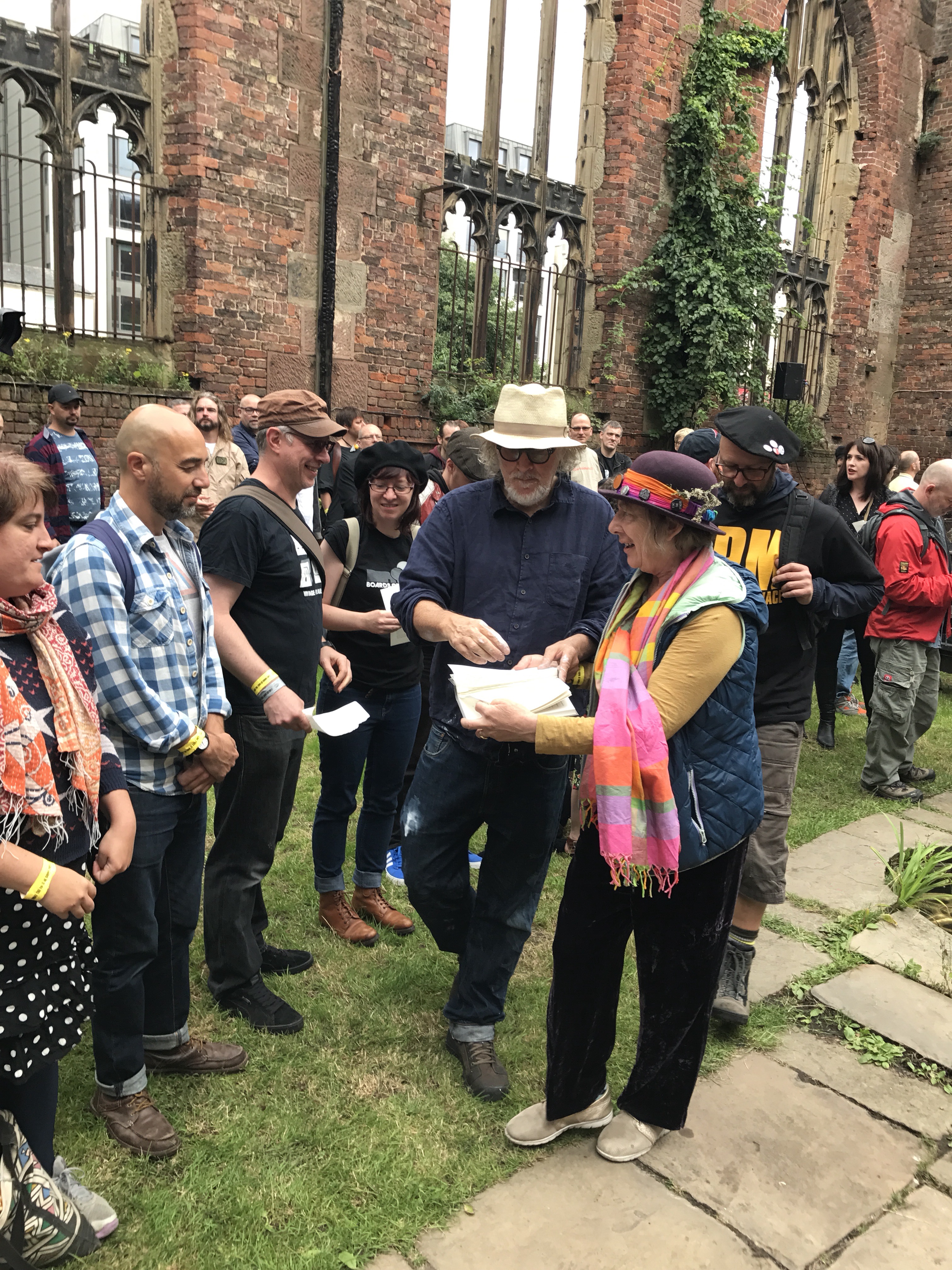 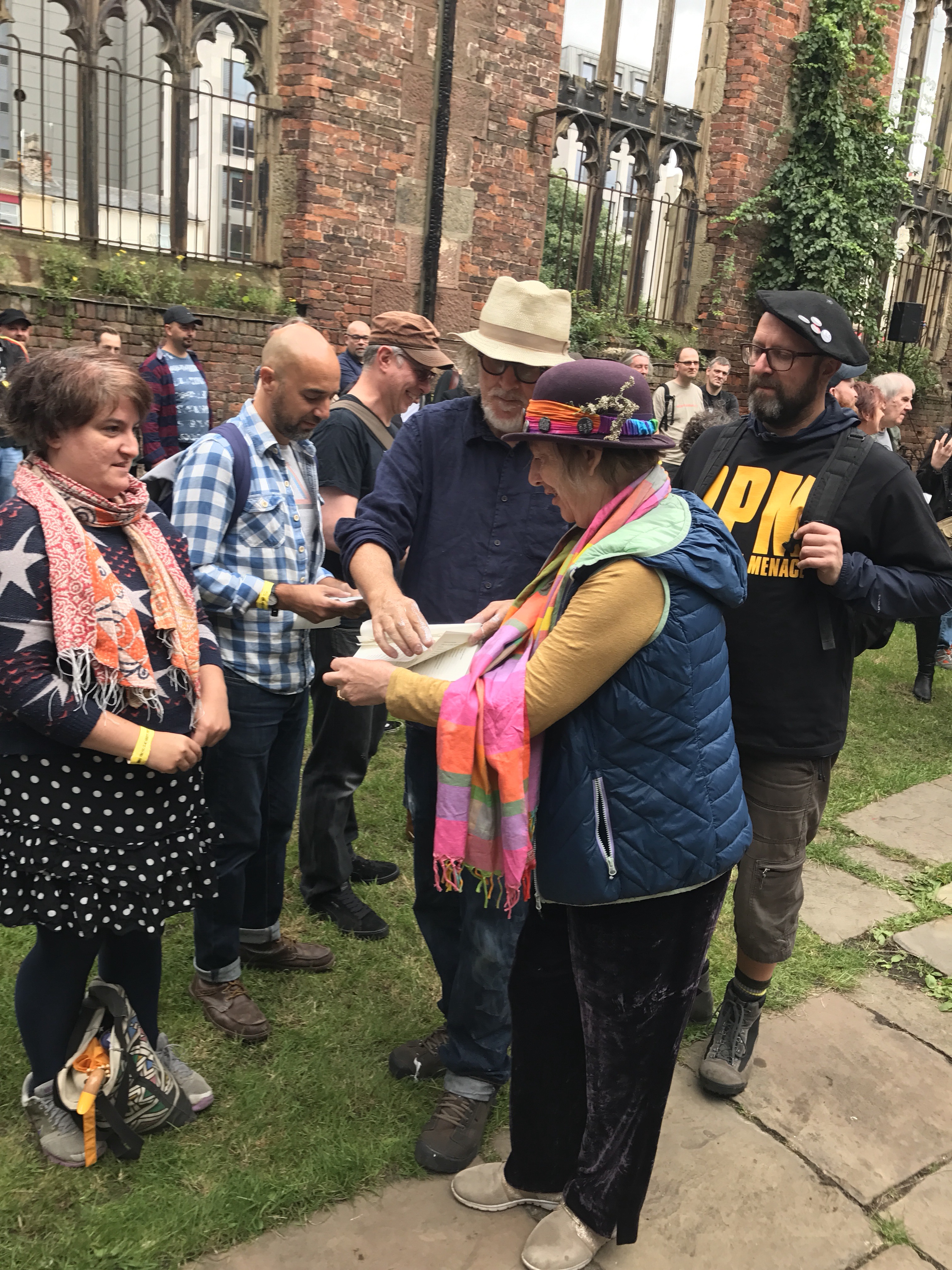 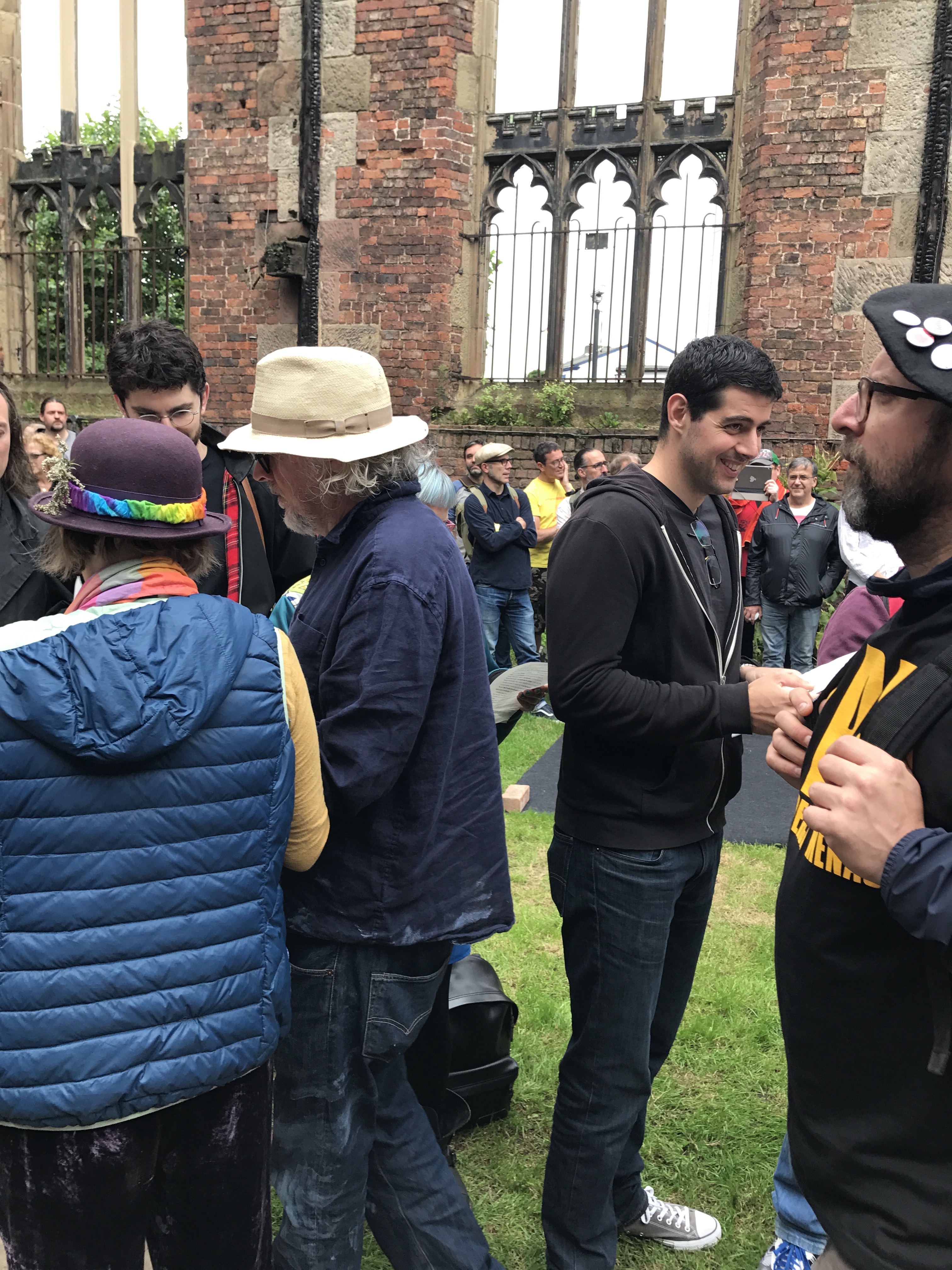 We then formed into our chapters – I was Book 1 Chapter 8 – and planned our response.

The first attempt, reading the chapter was quickly abandoned. It would take ages and one of us was missing already.

We reconvened outside, in the grounds of the church and completely by accident, by a memorial to record breaker and Dr Who companion, Roy Castle.

Within a few minutes we’d uploaded it to YouTube. One of our chapter, an elderly gentlemen with his leg in a cast was very impressed with the technology. I told him it was really quite simple and showed him how to do it on his phone. This man was Irving Rappaport and it was only after The Dark Ages that I realised the amazing life Irving had led.

Then we did a rubbing of the Roy Castle Memorial.

After that, before people drifted away, we posed for a Chapter Photograph. 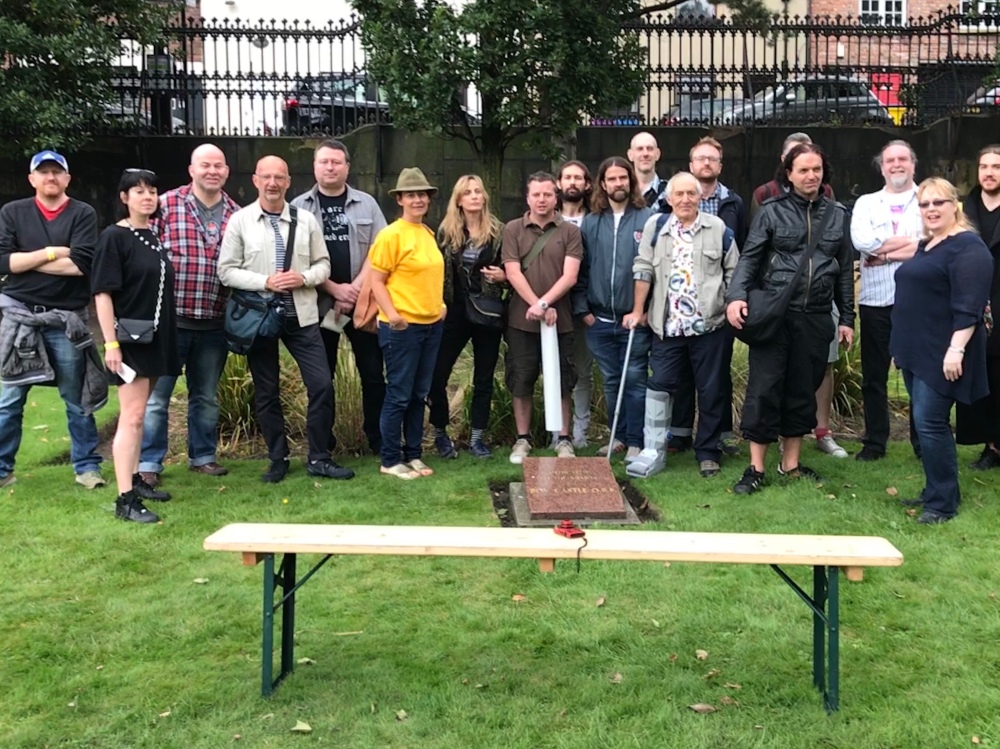 At this point, it became clear that a lot of the chapter had ‘things to do’. Steven had Badger Kull rehearsals, Dido and Irving had choir practice, ragwort needed collecting and cones needed repositioning. My Volunteer job was up and running from Day 1 and there wasn’t a great deal being asked of me.

So, with our response film recorded, we decided to show it to some people.

Well, as it turned out, only Oliver saw the original.

Jimmy was no where to be seen – fetching paint I think! – so we showed Bill’s reaction to another chapter.

Then Drew filmed my reaction to that chapter’s reaction.

Then the film was shown in the Apple Store, Starbucks and Poundland.

These showings were recorded on a disposable camera and sealed into this Jiffy bag. 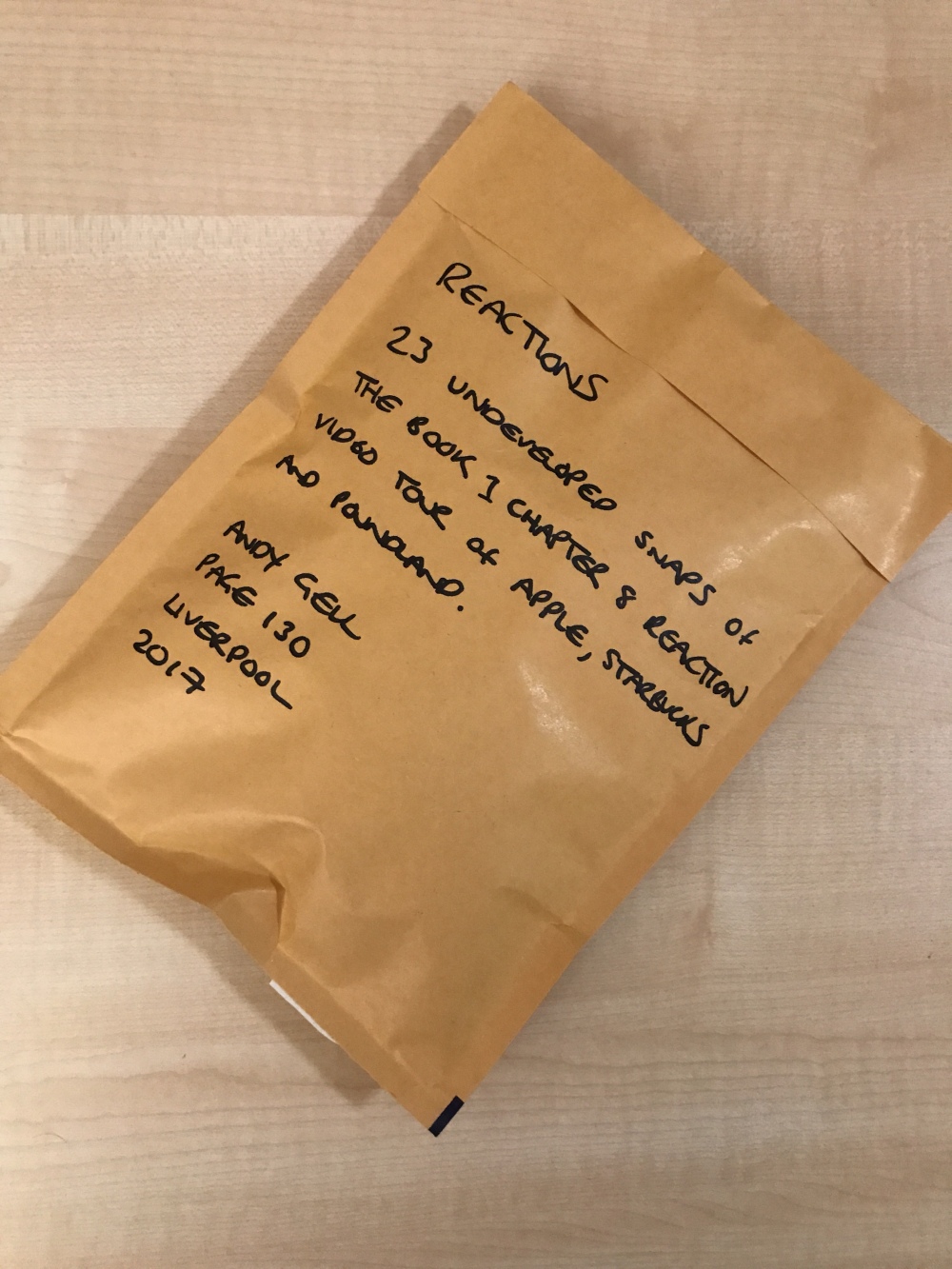 As I left The Bombed-Out Church for the afternoon, it was still a hive of activity with people drawing, cutting, singing, dancing, while a few dozen sat in deck chairs listening to Oliver’s readings.

I returned from touring the film just before 7pm. Everyone seemed happy with what I’d done with our response, but then it dawned on me that I’d have to present our response to The 400 and Bill and Jimmy.

After some delicious chunky vegetable soup we settled down fo the show. And what a show it was.

The 23 chapters each contributed something different from poetry to knitting, from tangerines to arson.

Some of what I captured is shared below.

Finally, there was the small business of a raffle for the prize of a lifetime. Page 99 won and then lost and Page 24 was the lucky beneficiary.

Then we gathered on the steps for a team photo. 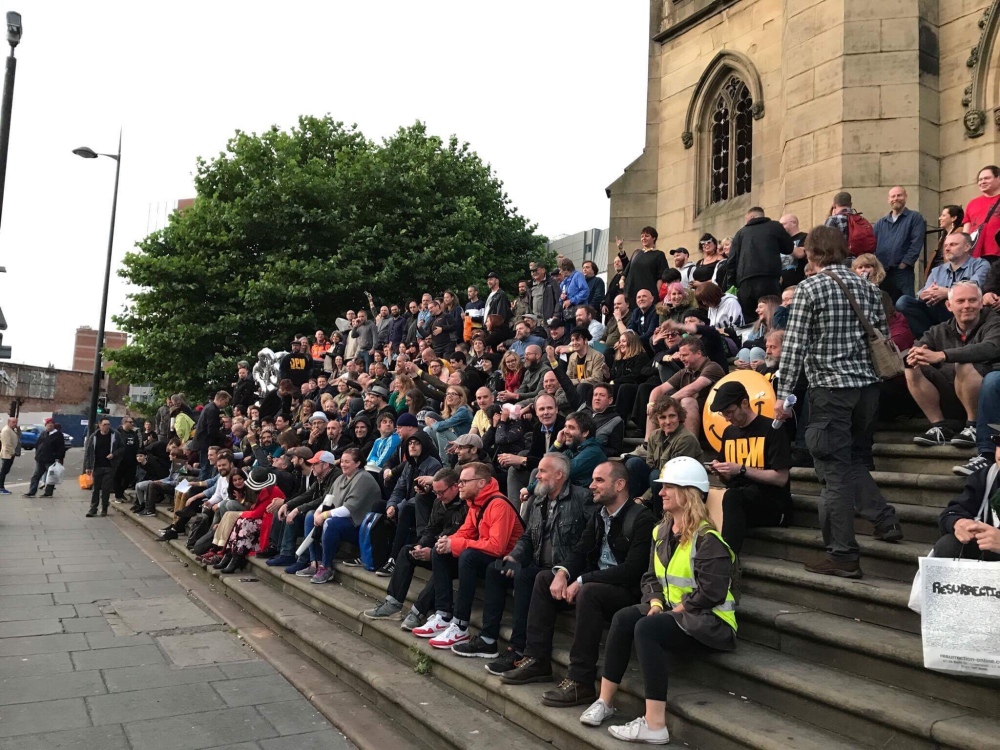 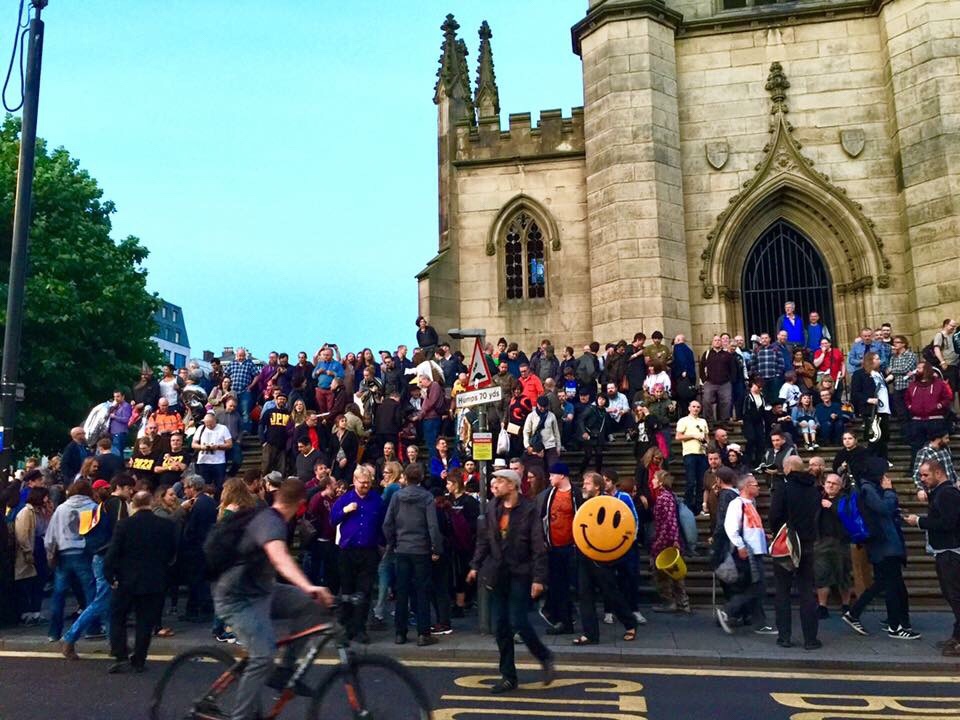 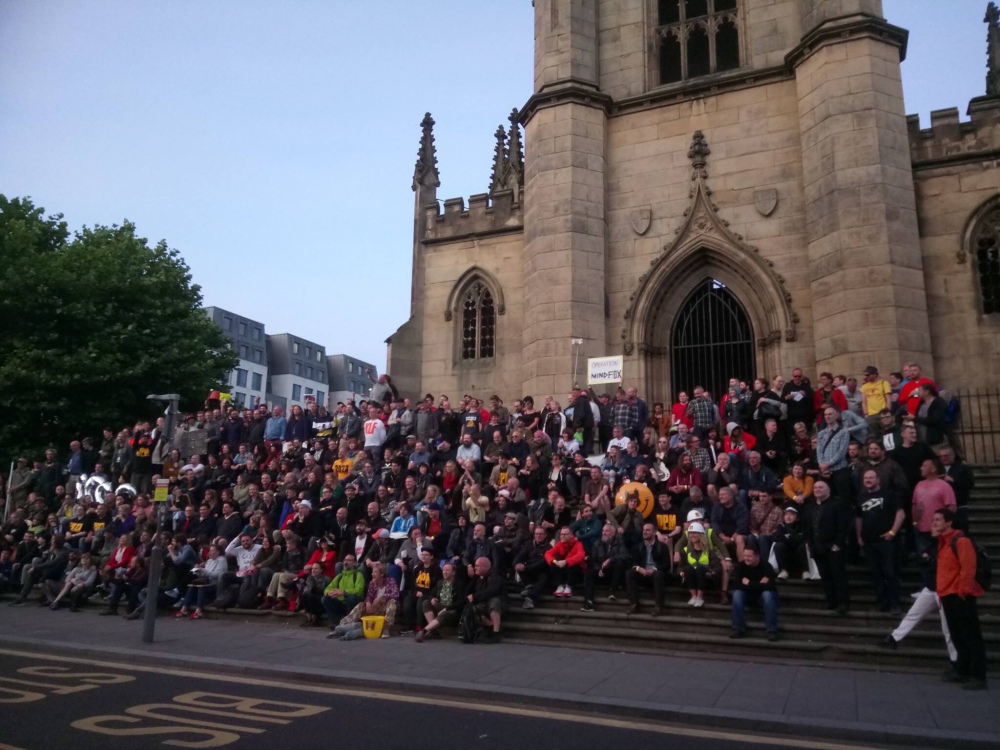 I finished the night over at The Dead Perch Lounge, including a long chat with Page 24. He gave away nothing. 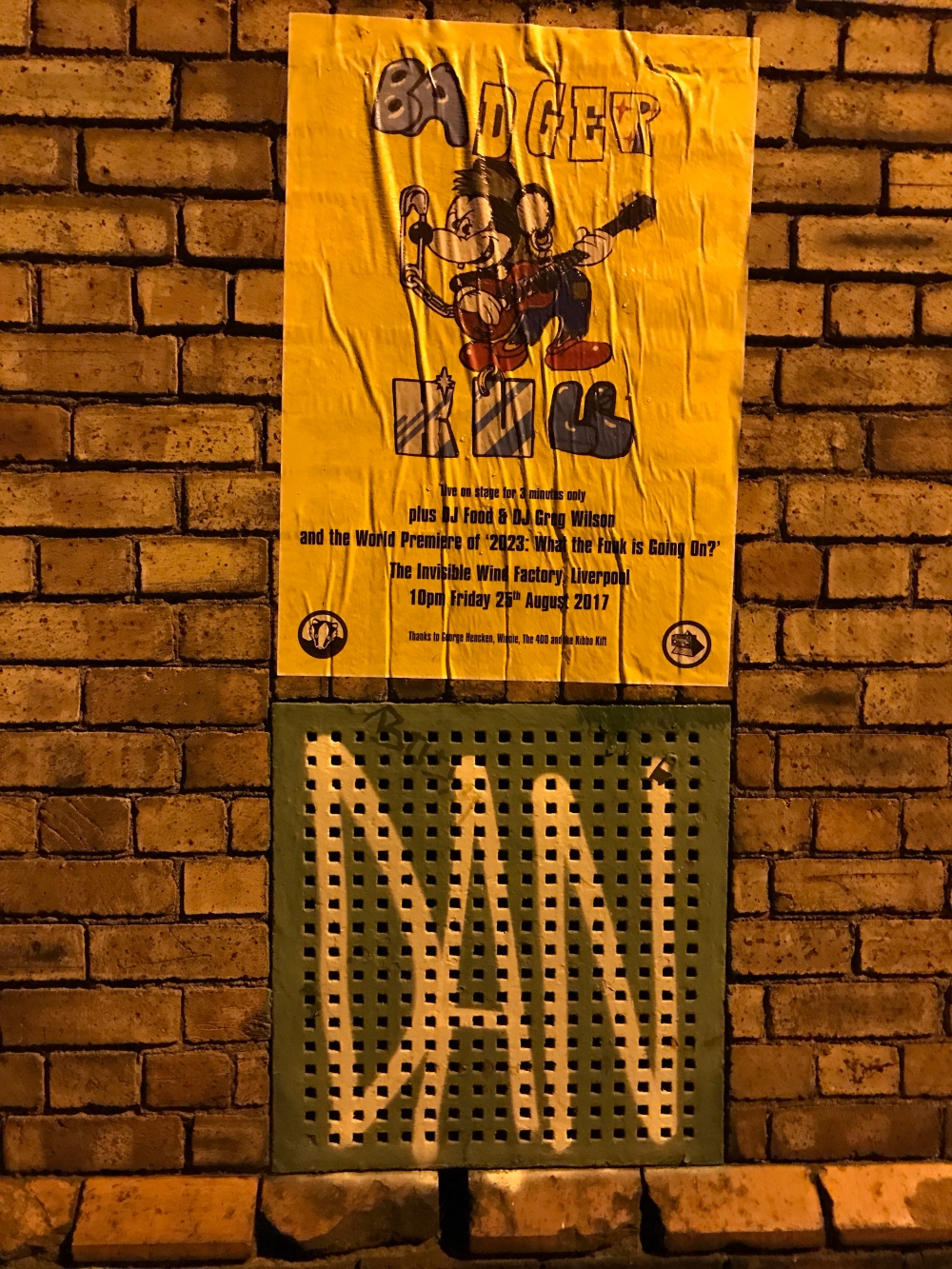 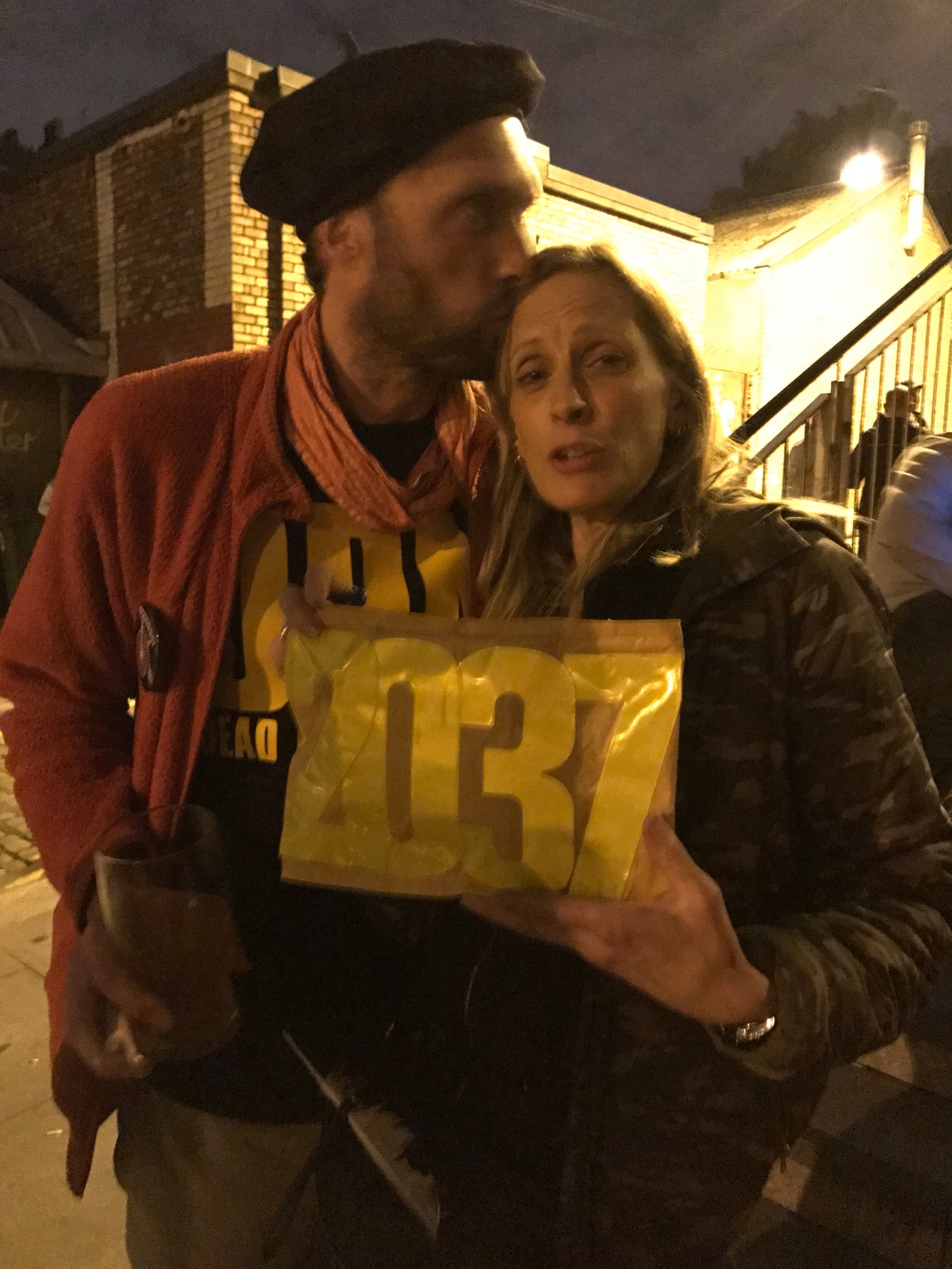 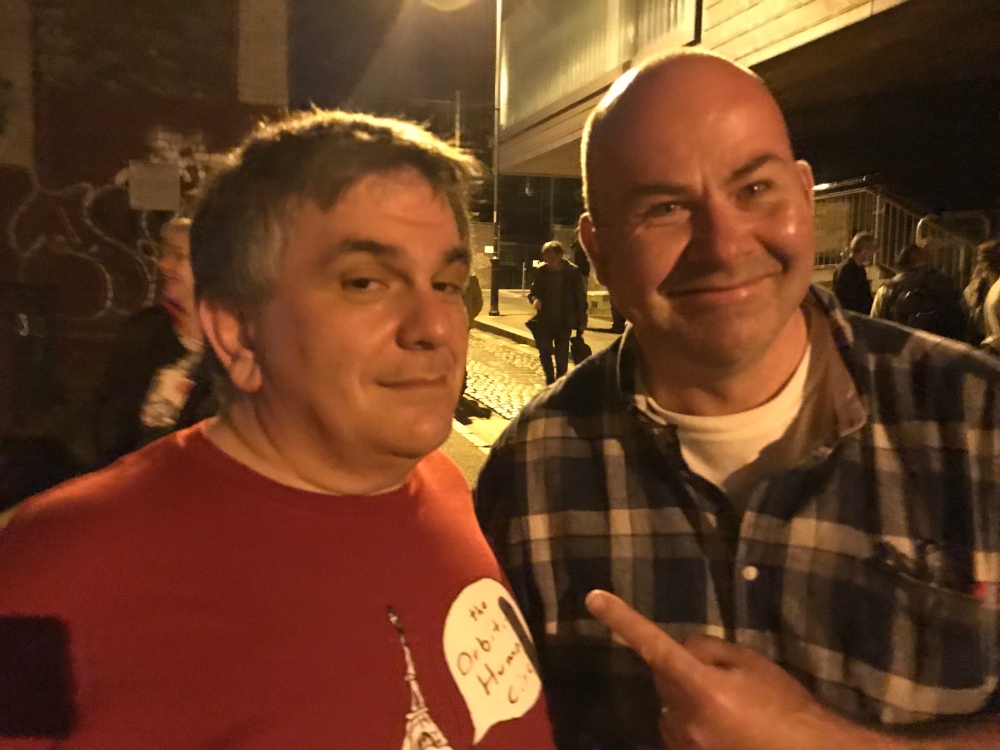