This is a text widget, which allows you to add text or HTML to your sidebar. You can use them to display text, links, images, HTML, or a combination of these. Edit them in the Widget section of the Customizer.
Posted on December 11, 2017December 11, 2017 by Page 130

All week the weather forecast has been for apocalyptic snow on Sunday 10th, with particular attention paid to my hometown of Nottingham. I really wanted to go to Hull, but would the weather let me? An after-work dash down to BTS is one thing, risking my life on the predicted ‘roads of death’ was maybe a step too far.

I woke up early on Sunday morning so as to best assess my options. It was already snowing heavily in Nottingham, but further North along my route in Doncaster and Hull, the forecast was encouraging. Adding weight to the ‘yes’ proposition, was the radio. 6Music played Pet Shop Boys ‘Left To My Own Davices’ – proto-KSTJ – followed by Betty Wright ‘Clean Up Woman’. All the signs were there. So Mrs G and I wrapped up with the intention of escaping the snow by going North and hoping that we could get home after the show. As it turned out, the snow never really arrived in our neck of the woods and getting home was trouble free.

We passed the time at The Deep in Hull, which was a wonderful waste of a few hours, despite the disappointment of no Killer Queen and no Tangerine Nitemare gig.

And so to The New Adelphi, a mainstay of Hull’s underground music and art scene, and just off Beverley Road, where Bill shined shoes earlier in the year in exchange for Your Darkest Thoughts.

Bill then took his place at the side of the stage, with a script in his hand and Tam Dean Burn took to the stage, toolbox in hand and wearing Bill’s actual clothes, which is why ‘they hang off’ him.

Tam as BILL sets up shop for the business of shoe shining and is quickly joined by a member of the audience who is actually an actor playing UNNAMED PASSERBY. He challenges BILL on what he is doing, how much he is getting paid for it and how he can justify getting taxpayers money for it. BILL tells some charming tales of how shining shoes was his favourite childhood chore, of a trip to Central Station in New York in 1963 where he sees a white man in a powder blue suit having his shoes shined by a black shoe-shine boy, and how James Brown used to shine shoes. BILL vows that if he is ever successful – like being in that Big In Japan – he will retire to shine shoes.

This act gets increasingly meta as firstly the UNNAMED PASSERBY demands a name – BILL DRUMMOND is rejected before CASSIUS CLAY is used – and then BILL forgets his lines and had to ask Bill what they are.

BILL having collected some, but not 40, darkest thoughts, retires to a nearby Hull pub and asks HAZEL and JACKIE if he could join them. He explains what he has been doing on Beverley Road, but their shoes do not need shining. However, they still offer up their darkest thoughts, along with some comment on Hull’s year as City Of Culture. The darkest thoughts are recounted as they were in real life and BILL promises to change their names and get another round in.

There’s a lot that I can’t talk about yet in Act 3. Suffice to say, Bill joins the stage after a monologue from BILL and reveals that his 25 PAINTINGS are being replicated in Port-Au-Prince in Haiti by a local artist for $100 dollars a time.

He also says that he never got to collect 40 darkest thoughts from Hull and that he will not leave The Adelphi until he has them.

I joined a queue of shoe-shine customers and we help Bill finish his collection. While he shines my shoes, I ask him if he had a favourite tune to whistle while he works. We agree that it is probably ‘Whistle While You Work’. 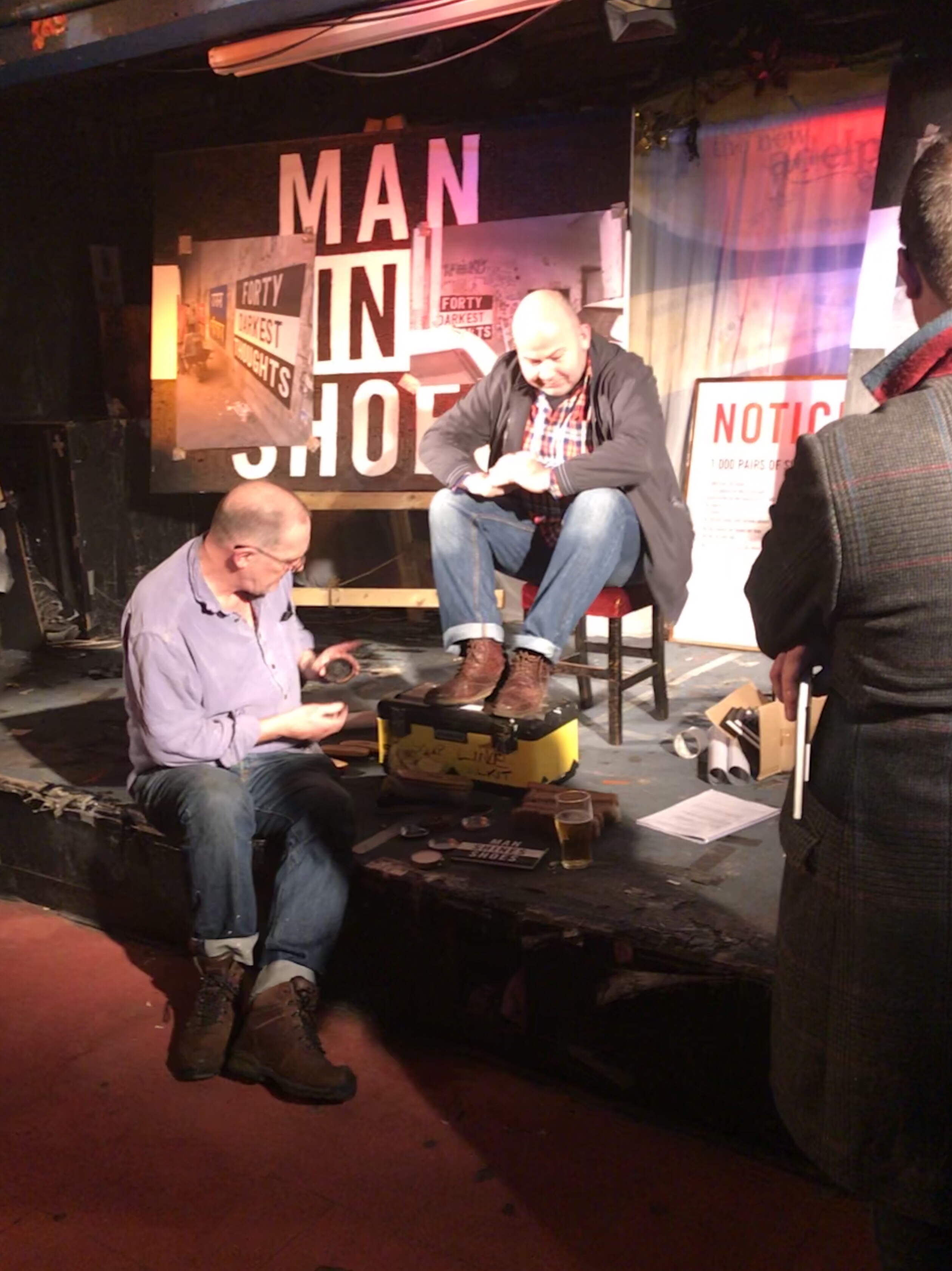 Then I get my MAN SHINES SHOES book and write down my darkest thought.

And then we leave Bill to his work.

I’m sure that plenty more will be said about this evening in the weeks to come. It is not my place to say anymore except it was an honour and a privilege to be there with Mrs G and we both are taking away a huge bag of emotions. The journey home was probably the first time we’ve really talked about Bill, Jimmy and what went on in Liverpool. It’s not that she wasn’t interested. It’s just been very difficult to articulate it all.

3 thoughts on “YOUR DARKEST THOUGHT”