This is a text widget, which allows you to add text or HTML to your sidebar. You can use them to display text, links, images, HTML, or a combination of these. Edit them in the Widget section of the Customizer.
Posted on November 30, 2017November 30, 2017 by Page 130

Very happy to welcome another guest writer in the shape of Mark Love, a veteran of Welcome To The Dark Ages AND Burn The Shard. Mark is also a founder member of The 400 Remix Project and a keeper of a stamped copy of Whatever.

Instructions.  Some make them. Some break them.  Some follow them. The JAMs do all three. Me?  I’m definitely better at following.

So when I was unsuccessful in getting a ticket for Burn The Shard, I wasn’t one of those tempted to go along anyway.  And yet two days before, when the hand of Eris threw me an apple, I made it my mission to find a way to be there.

And as I wandered along the canal bank to the meeting point with my ko-konspirator, I experienced the same feeling that I had had whilst driving up to Liverpool in August – wanting to know what the fuuk was going to go on, revelling in not knowing, and hoping that it would live up to my unspecified expectations.  I never had liked The Shard.  I’d watched its dull concrete core growing daily from my office window in 2009, and now I would watch it burn.

Arriving at The Barge House, and seeing several welcoming and now-familiar Facelife profiles put me somewhat at ease, but there followed a grilling at the door that had brought the subject of identity itself into question.  Did they know who we were?  Did we know who we were?  Was the notion of identity a false construct?  Kingboy D thankfully came to the rescue.  Whatever.  This was getting weird and we hadn’t even started.  I needed a dead perch, and I needed a job.  Fortunately both were on hand.  Allotted a job, and then being offered a part time job on the side, I started to relax as the canal water started to flow.  I relaxed so much I totally ignored the instructions on my side job.  Perhaps I’m not as good at following as I thought.

But before I could relax too much, we had more instructions to follow:

Go to the back room.

And we’re off!  At a fair pace!  Hopefully following the right jogger.  But if it’s the wrong one then others are mistaken too; and so disconcertingly I become reassured by the presence of Gimpo.  It is proving to be an odd evening already.   I hadn’t expected physical exertion to feature this evening, but The JAMs never exercise restraint.   Word reaches the front that someone is in the canal.  Surely there wasn’t a swimmer on one of the cards this time too?  Oliver appears confused, Gimpo appears amused. 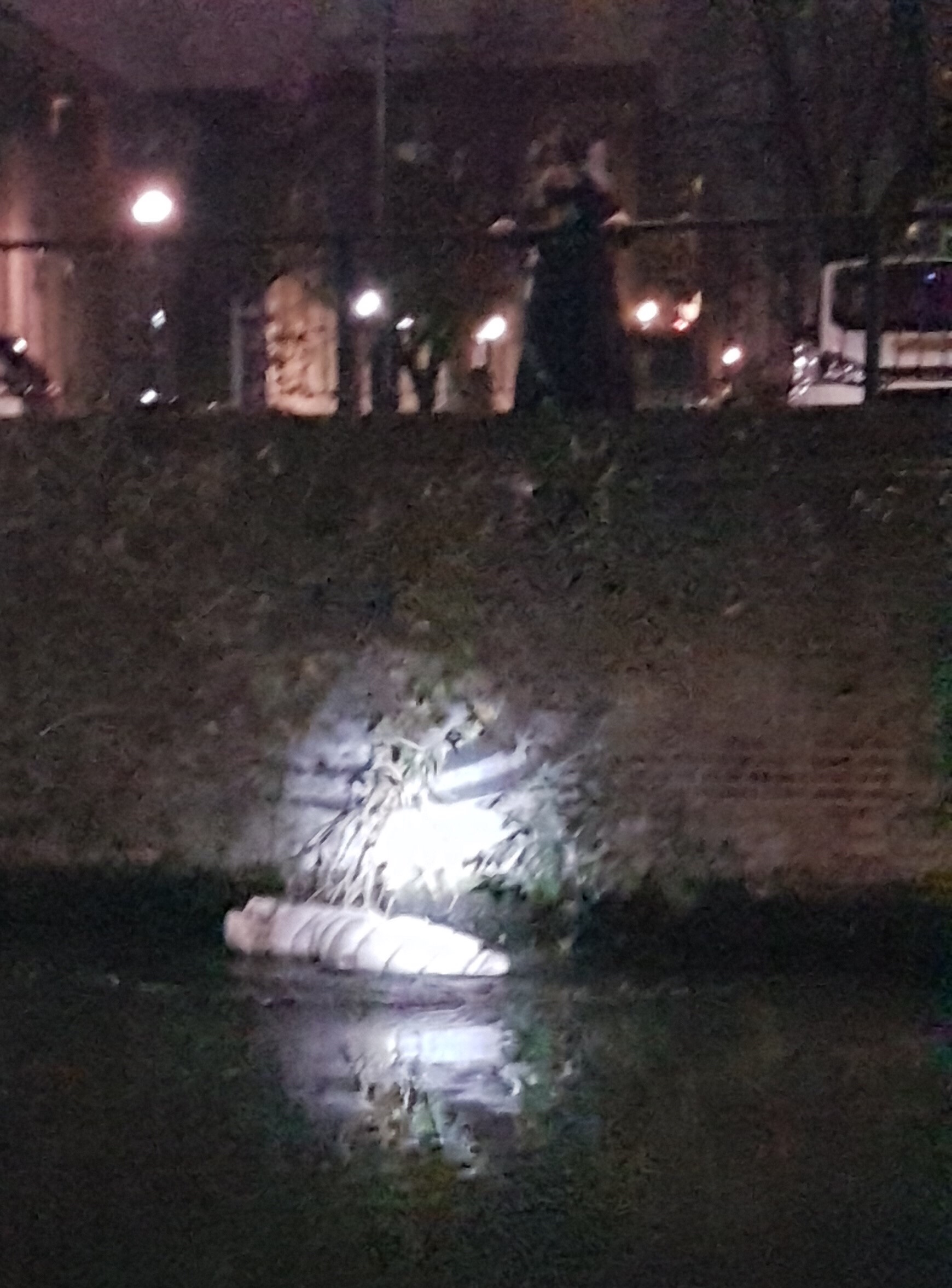 Before long there definitely is a body in the canal, as on the far bank Yoko Ono the Younger releases the bound body of John into the depths.  Job done, we move on. And on.  Along the canal, through the yellow smoke, outside the tower block, weaving along roads that might normally appear familiar to me.  Grabbing a rope.  The Officiator says the he needs slack, but this isn’t the time to convert religions, we’ve all got work to do Oliver, especially you.  And this is hungry work.  As we approach the Golden Arches “Big Mac and Fries” becomes our rallying call, led by Eris herself.  The JAMs have not taken dietary preferences into account – cows have been slaughtered (I died for Mu) – but we will in time forgive them.  They’ve had a lot on recently. 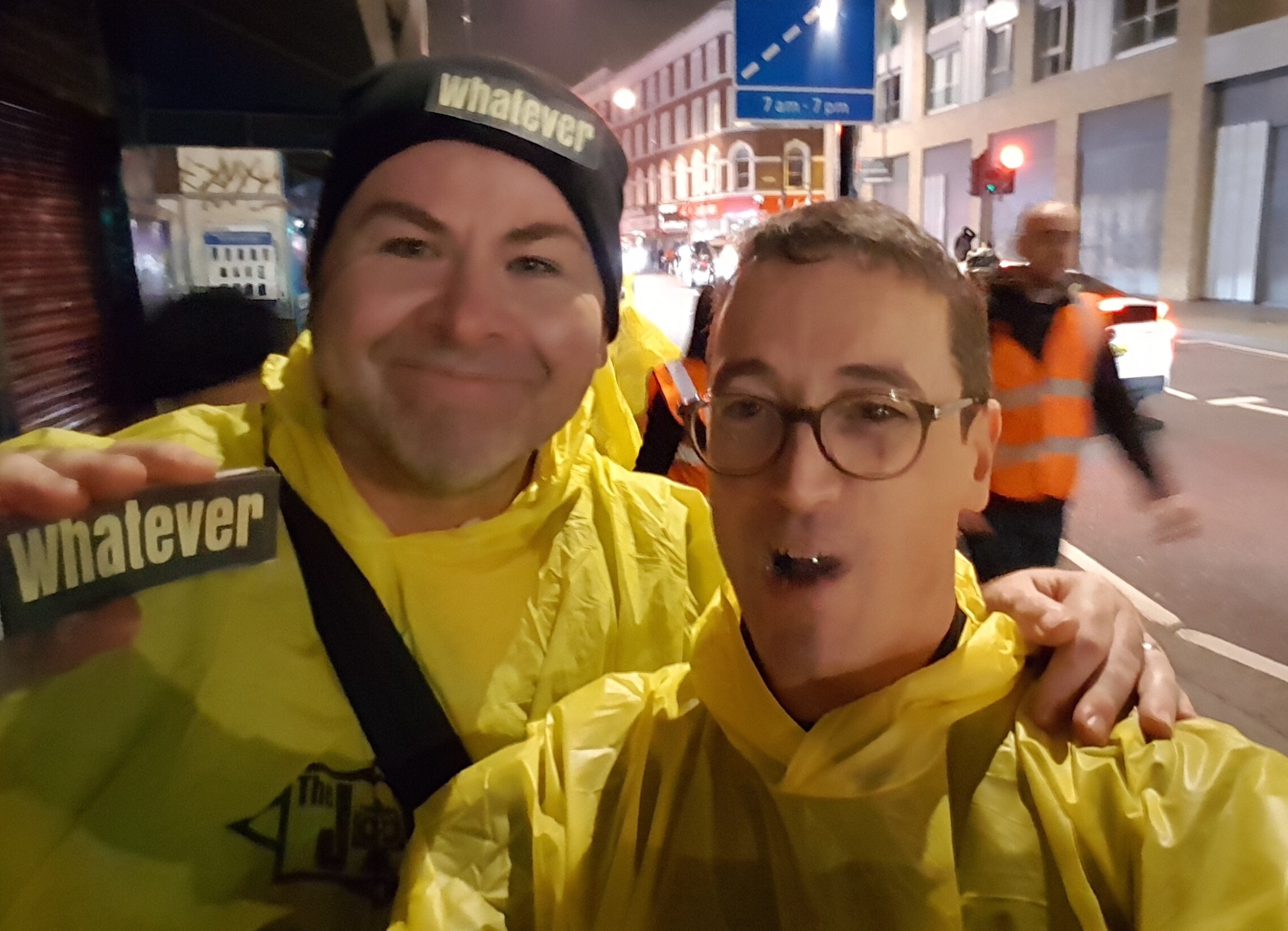 The McDonalds security guards have their instructions too, but their “brand protector operative” job cards were evidently not stamped by The JAMs; they appear aggrieved by this, and decline our requests.  Ronald didn’t give a fuuk, however, and had retired to the pub over the road for a pint, but there was no time for us to stay and join him – we had work to do.  Fortunately, mince pies and whisky were soon in hand around the corner.  Around the fringes of Gillett Square were dozens of other supporting actors who The JAMs have kindly placed there for our entertainment (or theirs).  Stella performances.  But we must move on again…

Our next set of instructions take the form of an elaborately staged (spoiler alert) incestuous kiss, which I hadn’t previously realised was the secret to successful flyposting.  But by this stage of the evening, even getting the posters the right way up was a challenge for Brother Matt, and so we instead only embraced the spirit of Eris once again.

Back at The Barge House hymn sheets were handed out, and more dead perch were sunk, before Badger Kull took to the stairs once again, and instructed us to sing along with them.  By this point things were so hazy that they could have performed a faux sea-shanty and I would have lapped it up.  Soon after I made a hasty exit, I’d only made it this evening by the skin of my teeth, and would need to leave in the same manner in order to get home.  It wasn’t a long way back to South London, but there was still that little matter of The Shard to take care of.   Good job someone’s following instructions..

One thought on “ALL YOU NEED IS LOVE”